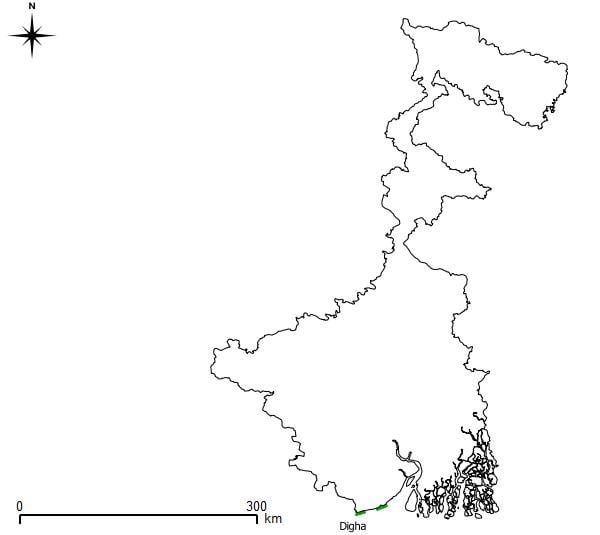 West Bengal has a small mainland coast, with two districts, Medinipore and South 24 Parganas. Olive ridleys are the most common turtle on the Bengal coast while, historically, there have been records of green and hawksbill turtles as well.  The nesting season lasts between December and March. Sea turtles are also known to occur in the sea-facing islands of the Sundarbans, mostly in the uninhabited regions.

During the 1980s, turtles were shipped from parts of Odisha and Andhra Pradesh to the Calcutta market for sale.  There are records of turtle exploitation from the islands of Sundarbans as well. Tigers, water monitor lizards and wild boars have been the natural predators of the nesting females and eggs in the Sundarban region.

By the late 1980s, many organizations became actively interested in the conservation of olive ridleys. Bonani Kakkar from World Wildlife Fund (WWF) and Indraneil Das who had just produced a field guide on Indian turtles began education and outreach programmes with a newly discovered scroll painter named Ranjit Chitrakar. Songs and epics along with 7 metre long scrolls were taken from village to village to generate awareness. Pamphlets on the importance of turtles in local language were distributed among the community.

In 2000-01, Nature Environment and Wildlife Society (NEWS) an NGO in Calcutta participated in surveys on the Bengal coast as a part of Government of India- UNDP. They located nests on the beaches of several of the deltaic islands where there was no human habitation. The trade in turtles had declined by early 2000 due to the vigilance of forest officials and awareness in the region. However, there still was a market for turtle meat at Digha-Shankarpur in the Sunderbans.

Unlike other places, West Bengal has an interesting range of natural predators of sea turtles. Monitor lizards and wild boars are often seen depredating nests as well as scavenging dead turtles (Gani 2000). What came as a surprise was that during the Government of India-UNDP surveys conducted in 2001, the team confirmed tigers preying on nesting females in the Sundarbans region (Roy and Choudhury 2001).

West Bengal was known as a hub for turtle trade in the 1970s and 1980s. Meat and eggs were regularly sold at the Calcutta market and were in high demand (Moll, Bhaskar and Vijaya 1983). Implementation of the Wildlife Protection Act and vigilance of the forest officials brought down the trade to a great extent by the 1990s.

Efforts to protect sea turtles began in the early 1980s when the Project Tiger team established hatcheries at Sajnekhali and Bhagabatpur. Eggs collected from different parts of the coast were taken back to these hatcheries. By 1989, the Sundarbans Biosphere Reserve was established and sea turtles nesting in this region were protected. Conservation efforts in Bengal involve reducing incidental catch, public awareness, control of trade and habitat protection.

In April 1977, T. K. Sen of the Zoological Society of India along with two Japanese scientists studying horseshoe crabs visited the coast of Digha. They encountered a strange assemblage of ridley carapaces half buried on the beach and published a note to the Zoological Society’s bulletin reporting this unusual occurrence (Sen 1978). A study by S. Biswas in 1974-75 along with a few scientists from the Central Marine Fisheries Research Institute exposed the trade link for turtles and their eggs. He produced a monograph on olive ridley turtles where he produced records from the Puri railway station to show shipping of thousands of turtles in the mid-1970s from Orissa to West Bengal (Biswas 1982).

CMFRI had become involved in studying sea turtle occurrence and biology in various parts of the country in the 1980s. The 1985 issue of Marine Fisheries Information Services had a note on the economics of turtle catch by two CMFRI scientists (REF). They showed that the improved road and rail network had led to an increase in the demand of turtles in Calcutta and Siliguri markets. The introduction of mechanized gear led to lower mortality of the captured turtles leading to higher profits.

Nature Environment and Wildlife Society is a conservation NGO based in Calcutta. Their primary focus is to “conserve ecology and environment, wildlife, natural resources and sustainable livelihoods for an improved environment”. They played a major role during the GOI-UNDP turtle surveys in 2000-2001.

Sea turtle at a market

Key figures in turtle conservation and research in West Bengal

Biswas, S. 1982. A report on the olive ridley, Lepidochelys olivacea (Eschscholts) (Testudines: Chelonidae) of the Bay of Bengal. Records of the Zoological Survey of India 79: 275–302.