Adult loggerheads measure between 75 and 100 cm in length and typically weigh up to 159 kg. Loggerheads are named after their exceptionally large heads. Their front flippers are short and thick with 2 claws, while the rear flippers can have 2 or 3 claws. Track marks measure 70 to 90 cm wide, are moderately deep and have asymmetrical diagonal marks made by forelimbs. The tail drag mark is usually absent. The carapace, which is reddish-brown with a yellowish-brown plastron, is heart- shaped. Hatchlings have a dark-brown carapace with flippers which are pale brown on the margins.

Primarily carnivorous, loggerheads feed on shellfish that inhabit the bottom of the ocean which can be easily crushed with their powerful jaws. They also feed on horseshoe crabs, clams, mussels and other invertebrates. Loggerheads reach sexual maturity at approximately 30 to 35 years of age. The average interval between nesting seasons is 2 to 3 years, but this can vary from 1 to 6 years. The loggerhead mating season is from late March to early June and they prefer to nest during the night.

The loggerhead is extensively distributed within its range. The species prefer extensive mainland beaches or barrier islands. They may be found hundreds of miles out to sea, as well as in inshore areas such as bays, lagoons, salt marshes, creeks, ship channels, and the mouths of large rivers. Coral reefs, rocky places and ship wrecks are frequently used as feeding areas. Loggerheads nest on ocean beaches and occasionally on estuarine shorelines with suitable sand. Nests are typically made between the high tide line and the dune front.

The loggerhead sea turtle occurs all over the temperate and tropical regions of the Atlantic, Pacific, and Indian Oceans, although the bulk of loggerhead nesting is at the western rims of the Atlantic and Indian oceans. The most recent reviews illustrate that only two loggerhead nesting beaches have greater than 10,000 females nesting per year. Loggerheads are not known to nest in India, but nests have been recorded in Sri Lanka and the Gulf of Mannar. 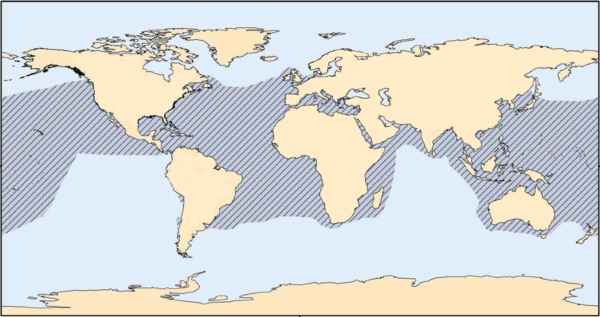 The loggerhead turtle has been listed as a Vulnerable Species by the IUCN. Loss of nesting habitats due to coastal development, predation of nests, and human disturbances are the biggest threats to the species.

Shrimp fishing, gill netting, and activities associated with offshore oil and gas exploitation threaten the species in the Gulf and southwest Atlantic waters where they are found in large numbers.