When a Million Turtles Land 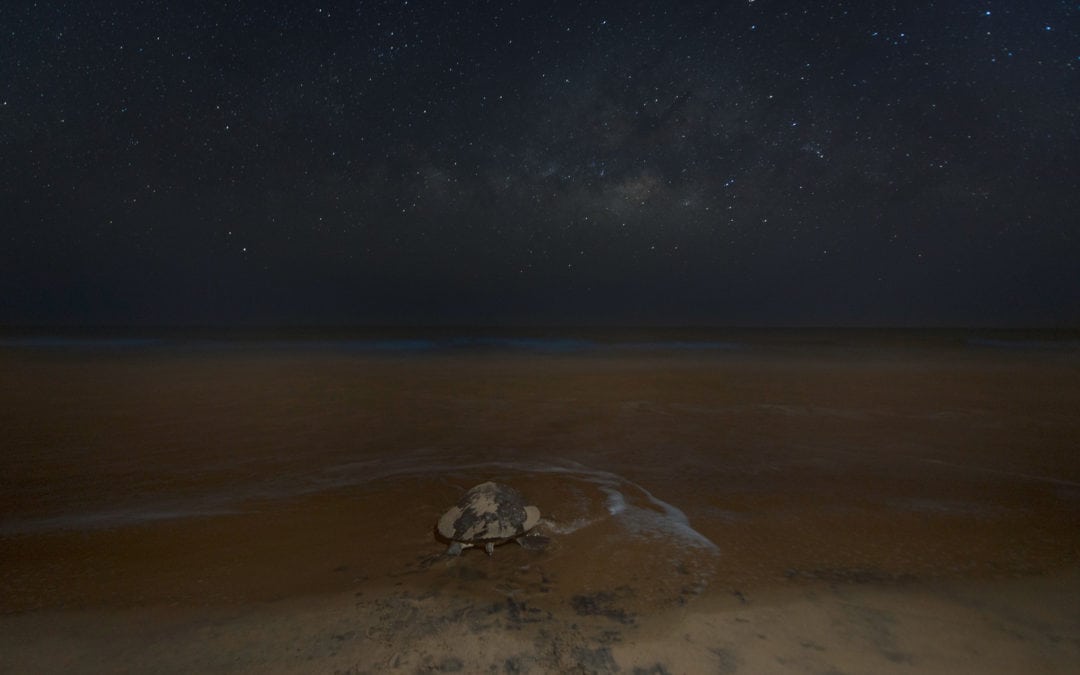 It was just past midnight. The narrow stretch of beach was deserted, empty. It was not supposed to be — we were there, at that time and in that place, to witness one of nature’s most extraordinary occurrences: the mass nesting of Olive Ridley turtles. The moon had set; the sky was lit with a zillion stars and the band of the Milky Way just above the horizon. The only sound was the gentle lapping of the waves as the tide receded.

“Dakshin ka hawa aana padega” (The wind needs to blow from the south), said Bipro, field assistant to the researchers who monitor the annual event. Local wisdom holds that when the wind starts blowing from the south, the turtles will appear in numbers sufficient to qualify as the mass nesting event, the arribada.

On that night, there was hardly any wind at all, never mind its direction.

A day earlier, wildlife biologist Chetan Rao had called to say the turtles had started coming out in large numbers, and that mass nesting could happen any time now. We took the next available flight from Bangalore to Bhubaneshwar airport, where we were met by Naresh, a young man with cheeks bulging with a lump of gutka. We were well along the road before he wound down the window of his red Indica and got rid of his chew in a long stream of red spittle.

“How long will it take us to get to Rushikulya?” I asked. “Normally it takes two and a half hours, but today we will do it in less than two hours. I have a wedding to attend after I drop you off.”  Fair enough — work expands to fit the time allotted to it, I remember reading somewhere. Once out of Bhubaneshwar city limits, we raced along a lovely countryside of agricultural fallows, hillocks that are part of the Eastern Ghats and small villages that straddled the highway. We drove along the fringe of the famous Chilika lake; from where we were, it looked as big as the ocean.

We reached the research station in Ganjam, a small town with great historical significance. A two-storey house in a narrow street crammed with similar homes is the base for researchers from the Indian Institute of Science (IISc) and the NGO, Dakshin, who have been monitoring the annual nesting of the ridley turtles for close to a decade.

We met up with Chetan and his team, who requested Nimmi to come and take us to the beach. Nimmi owns an auto-rickshaw, and his boast is that he can fit 20 people in it. Seven of us piled in, and Nimmi drove to the beach about 2 km away from the camp. We parked in the small fishing hamlet of Gokhurkuda, and walked to the beach past a wall of casuarina, which is ubiquitous in these parts.

The field assistants, Bipro and Mayo, were already at work, counting the eggs of one turtle that had come out to nest. As we watched, two more turtles came out of the ocean, excavated pits in the sand and laid their eggs. When the counting was done, we drove back to base.

The trickle of turtles was a bluff.

Over the next few days, anywhere between 40-50 turtles came ashore each night, but only a dozen or so actually nested. There was no sign of the arribada.

Turtles congregate in large numbers just off the coast before they come ashore. We decided to check what was happening offshore, and took a large boat out on a choppy ocean. Just as we cleared the wave line, we saw a turtle pop its head out of the water, right next to our boat. It had surfaced to breathe. Even as we watched, one surfaced on the other side as well, and then another.

Before we knew it we were surrounded by turtles, more than we could count. They hung around on the surface, basking in the morning sun. I sent my quad-copter out over the ocean to get a top down view and sure enough, there were turtles everywhere.

Around us, fishermen went about their business, and we learnt that they were having a bumper harvest, interestingly coinciding with the congregation of the turtles. But we were there for the mass nesting and even after a week of waiting, there was no sign that it would happen. We packed our bags, and headed home.

Arribada is a Spanish word that means “landing, arrival”. It derives from arribar — “to land, put to shore, arrive”. The word has been adopted into the biological lexicon to describe the mass nesting of sea turtles that occur on certain beaches across the world. Large groups of Olive Ridley turtles gather offshore and, over a short period of a week, tens of thousands of turtles come ashore and nest. This is the famed arribada.

Olive Ridley turtles nest all across the coastline of India and the islands of Andaman and Nicobar. But mass nesting is only seen in two places—Rushikulya, where we were, and Gahirmatha, an island a few hundred kilometers north of where we were. No one really knows what cues the turtles to come out en masse at a specific time, though scientists have spent decades studying the phenomenon. For now, the “Dakshin ka Hawa” theory was just as good as any.

Two weeks passed. I was in a forest in southern India when I got a frantic early morning message from Chetan. “Mass nesting has started at 2 am this morning. Hurry”. I dropped everything, rushed back to Bangalore and took a flight to Vishakapatnam and then drove for five hours to reach the nesting beach.

The news was out already. The normally quiet beach was now jammed with hundreds of locals, men and women, young and old, who had come out to witness the arribada. We walked past the line of bikes and cars, and crossed the chain-link barricade erected by the forest department, and entered the beach.

And then my heart stopped.

The sandy beach had disappeared under thousands of semi-circular, grey-brown domes stretching all the way as far as my eyes could see. Each new wave that crashed on the coast carried a few hundred more turtles, left them behind on the foamy shore, and went back for more.

Even as the wet turtles, with their luminescent backs, climbed up the beach, sand-covered turtles headed back into the ocean after having laid their eggs. They avoided each other gracefully, for the most part, though we saw a few head on collisions as the numbers kept increasing and space became scarce.

Once beyond the tide line, the incoming turtles went to work. There was no time to choose a perfect site—as soon as a turtle came upon a free spot, it settled to its task. Finding a spot on that beach that was free was a task, though. Turtles climbed over each other, occasionally burying the ones beneath, and dug up other nests without intending to, all in the frantic scramble for some space in which to lay their eggs.

As we watched in awe, a female began scooping out sand with her flippers, in a space near where we were standing. She made a pot-shaped chamber with a long ‘neck’. As she dug into the sand, she was inadvertently scooping out eggs laid by another female earlier—the soft, thin-shelled eggs flew all over the place, breaking and filling the area with a pungent odor.

Further ahead, we watched a female crawl over another female who was busy laying her eggs. She decided to nest less than a meter from the first female and as she started digging, she completely covered her neighbor with sand. Each female took less than an hour to finish her job and then returned to sea, navigating a path through the growing crowd as the beach swelled with more turtles than it could handle.

It was unbelievable. We could not count without losing count; we did not know where to look, or what to look at. We could not believe that the calm, placid beach we had spent time on just two weeks earlier was now this heaving, writhing mass of turtles, of their tracks, of the smooth dunes that covered their nests.

As dawn neared, the turtles on the beach were frantic to finish their task and head back to the sea. I flew my quad-copter up to get some aerial perspective on a scene the magnitude of which I couldn’t grasp from the ground.

Now the arribada began to make sense to me.

It is nature’s survival strategy, where turtles saturate the beach with eggs. When we were there over a fortnight ago, we had seen a few turtles nest—and we had watched jackals and local dogs feast on those eggs. So, mass nesting—now, the beach was covered with so many nests, holding so many eggs, that even the most predatory of the jackals and dogs would be sated—and a lot of eggs would survive to hatch.

Eggs hatch in roughly 50 days, and the hatchlings scramble across the sand sea and submerge in their element of choice—the ocean. Once they are 10-15 years old, they will return to this very beach to lay eggs. How do these young ones know the precise location of this one particular beach? How do the adults time the arribada? Science is still seeking answers.

The Odisha coast is crisscrossed by estuaries, rivers and creeks, large and small. The land is inundated by the saline and sweet water, and covered with mangroves. Estuaries are the breeding and spawning grounds for fishes, prawns, crabs and mollusks. This rich habitat is likely what supports the large populations of olive ridley turtles. About 50% of the total world population of olive ridleys, and 90% of the Indian population of sea turtles, congregate here every year.

These turtles will be among the first victims of climate change, because temperature determines the gender of the hatchlings. Warmer temperatures mostly produce females and cooler temperatures produce males predominantly. As temperatures rise, the sex ratio skews, and that is potentially dangerous to its continued survival.

For now, though, things seem under control in the Indian waters. Various departments, including the Forest Department and the Navy, protect the Rushikulya and Gahirmatha beaches. This year, the Indian defense Institute at Gahirmatha switched off their lights at night to help the turtles to nest, as bright lights disturb and disorient them. Fishing communities in this area are supportive as well, and reduce their trawling close to shore at such times.

The mass nesting continued for six nights. Bipro and Mayo and the researchers barely got any sleep. Finally, it was done. We began to pack up. As I brushed sand off my camera, I noticed a gust of wind blow it away. I picked up a fistful of sand and let it trickle out.

The winds from the south carried it away, gently.

Kalyan Varma is a wildlife photographer, filmmaker and naturalist (http://www.kalyanvarma.net/)