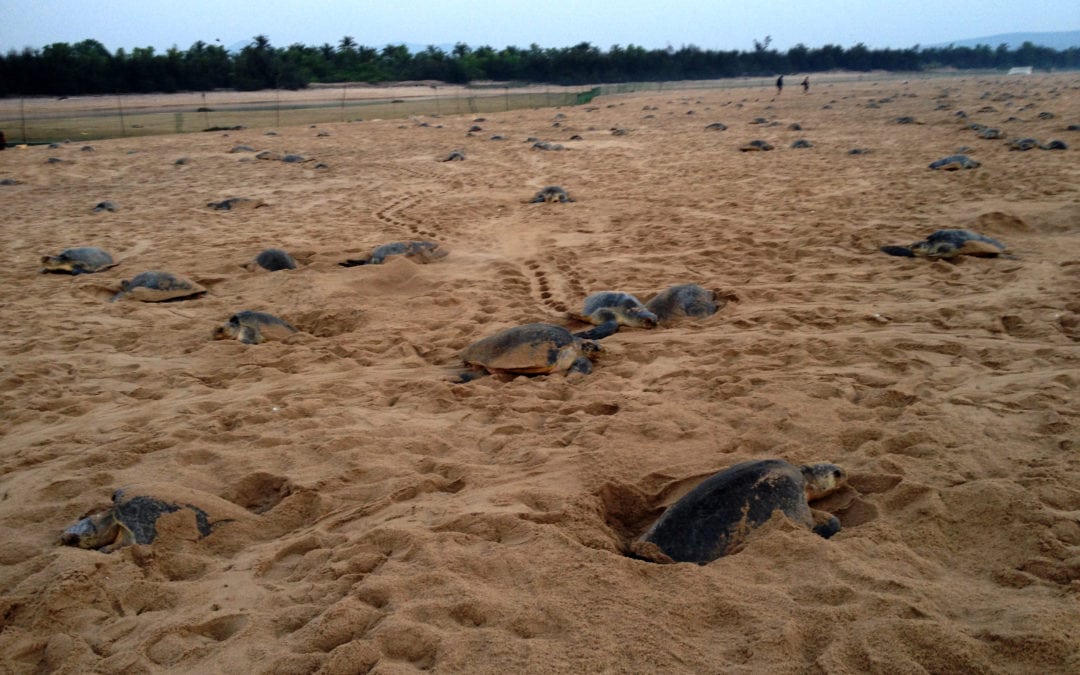 A phone call. An excited voice says: the number of turtles arriving to nest on the beach is slowly rising. And it was tending towards the new moon night (last quarter) and myth has it that that is when the arribada happens. I dropped all other work, schedules, plans, and set off to Ganjam, Odisha, where the Centre for Ecological Sciences and Dakshin Foundation have a research station. It is just a few kilometres from the Rushikulya river delta, the beach around her mouth being one of the two sites in India, where arribada or mass nesting of olive ridley sea turtles occurs.

Arribada was a term I first heard 25 years ago, when I started going on turtle walks on the Madras coast. I had joined the Students Sea Turtle Conservation Network (SSTCN), a group of student volunteers who were monitoring and protecting the nesting turtles along seven kilometres of beach between Besant Nagar and Neelankarai. It was my first experience in wildlife fieldwork, a stepping-stone that built my confidence and comfort in fieldwork at night.

Arribada, borrowed from Spanish, literally means, “landing, arrival” from arribar “to land, put to shore, arrive”. In Madras, a few each night was a cause for celebration. The arrival of large numbers/thousands of sea turtles that the word stood for fascinated me, and was something that I wanted to see for myself. It went on my bucket list.

Later, while I was a student in the Wildlife Institute of India, Bivash Pandav, then a researcher at WII, brought to our attention the mass nesting of sea turtles in Rushikulya. Until then, only Gahirmatha had been known as a mass-nesting site in India. In 1995, I was fortunate to have visited both sites, but well after that year’s arribada.

It seems my tryst with the turtles continued, and I would accompany Kalyan Varma and the sea turtle research and monitoring team from Dakshin/CES, during this season. The phone call was from Chetan to Kalyan. 40 turtles had arrived one night and it seemed a large enough number this season to portend mass nesting.

We rushed there (from south India/Bangalore) and managed to reach the following evening, and left immediately for the beach. Walking along the beach, we were excited by every turtle or trail we saw emerging from the sea, scouting the beach, or settling to nest. We walked and waited, night after night for a week, for the much-awaited arribada. Our energy was high, our expectations higher. But the turtles seemed to have plans of their own, in sync neither with the moon nor my prayers. And so we found time to chat, star gaze, exchange stories, watch the Milky Way and ponder about life. By day, we went out to watch birds and get the students hooked on to another kind of monitoring using ebird!

It was an enjoyable time, being there, getting to know others and living in hope, but we knew we had to head back soon. However, not before we explored the scene out in the sea along the shores. The sea was teeming with turtles. It seemed like they were waiting for a cue, that even decades of research has not enabled us to understand, to predict.

As we left, with a heavy heart I wondered if I had missed the arribada again, unsure whether I would get another chance.

About ten days later, I woke up to find several missed calls and exhilarated messages from my friends (Nupur, Chetan, Madhuri). Kalyan and I set off again on a long journey: by road, air, and by road again.

We went straight to the beach and reached just as a waning moon rose. We felt that we had landed in a wrong place; the beach was not what we had known it to be. It was completely transformed. Pitted and ploughed by the turtles that had landed en masse, there was barely space for us to set foot. It took an effort to walk without either stepping on a turtle or trampling on a nest or an egg that had been thrown out by another turtle eager to lay her eggs. There was a damp smell of smashed eggs mingled with salty whiff of the sea permeating the air.

Now, the word ‘arribada’ made complete sense. Along the shoreline, the olive ridleys landed, row after row, wave after wave of single-minded turtles—emerging from sea to shore. I had waited for over two decades to see it, but I was still not ready for the unfolding spectacle. There were so many turtles, that it was difficult to count without losing count, starting again. One did not know where to start, what to look at, when to stop. What had been a calm, quiet spread of sand, now was covered by tracks and trails of turtles arriving and leaving, bumps of carapaces, or potholes where nests were being excavated, or smooth dunes that marked nests that had been completed and well covered.

We went straight to work. Amidst rushing to watch, see, and photograph at once, I took short breaks, sat on the crest of the high-tide line, from where I could see both the sea and the nesting beach—the landings, the goings-on, and the departures into the ocean. My senses were overwhelmed in the faint star-lit night. Turtles saturated the vision, while the rhythmic, tranquil wash of the waves pervaded the ears and mind. In that quiet and darkness of a moonless night, the flip-flops of the flippers hitting the shore sounded, with the heaving and sighing of heavy bodies as they trudged up to find a nesting spot of choice, the gasping and thudding of the nesting turtles. The turtles walked over me, under me, clawing, rubbing past, pausing, staring, oblivious yet aware. Only the flashlights of people counting and watching the turtles, and the howls of some feasting jackals interrupted the scene.

An orange moon rose over the horizon and cold winds swept the beach. We continued to watch and marvel at the spectacle of these ancient creatures engaged in a primordial phenomenon. As the tide of turtles on the beach piled and ebbed, arches of sand were tossed about, and they landed softly on us. We were there, a part of it, as open-mouthed and starry-eyed spectators.

Divya Mudappa is a Scientist at Nature Conservation Foundation-India, and works in the Western Ghats.