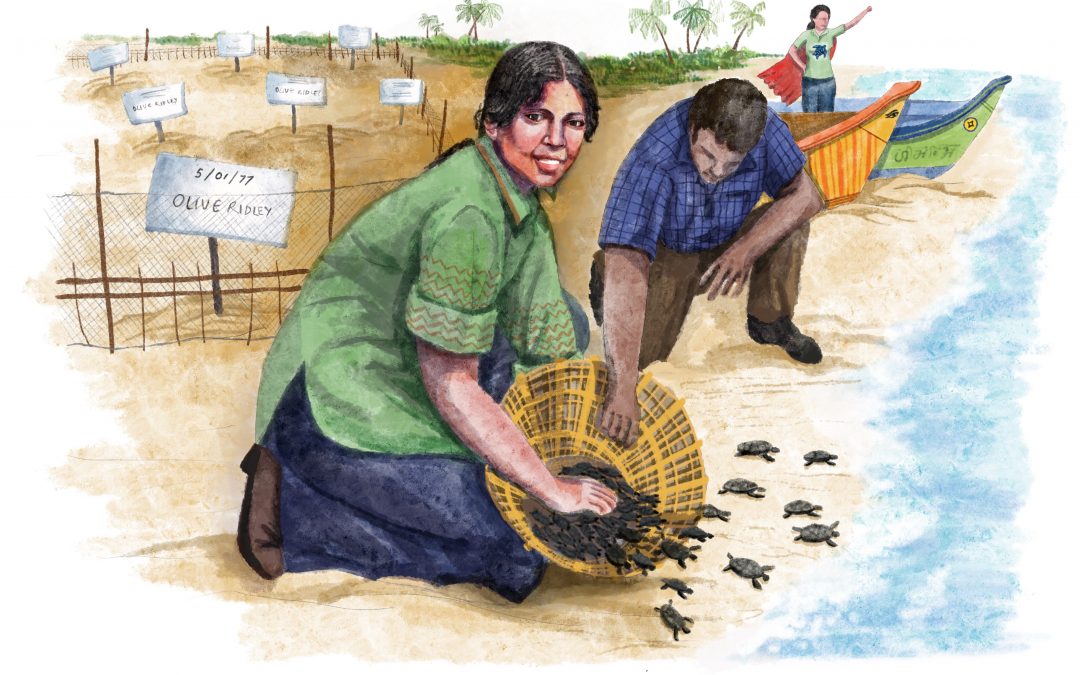 KS: Which school were you in? And why were you fascinated with snakes? It’s very unusual, isn’t it, especially at that time?

AA: I studied at St. Dominics School at St. Thomas Mount. Yeah, it’s unusual to be fascinated with snakes but I remember when it started. One day there was a snake on the roof of my house and it fell down and my parents killed it. I was terrified of snakes at that time. Later, I picked it up, because I knew it was dead, and I felt very sorry for it. I realized most of these creatures are harmless. I didn’t know which snakes were venomous, but everybody thought all snakes were venomous.

After my shorthand and typing classes, I used to go straight to the snake park to watch the snakes move about. Romulus Whitaker used to see me come every day to look at these creatures. One day, he asked, “Would you like to work here?” And I immediately jumped at the chance. But when I told my mom she said, ‘nothing doing, not Snake Park’. I said, “I’ll work there till I finish my course and after that I’ll get a proper job.” So, she agreed. And the first job Rom gave me was to get into the central pit filled with all types of snakes, and to paint the glass with ‘Do not throw stones’ and ‘Do not tease snakes’. I was terrified, you know, all these things crawling up to me – cobras and all. Slowly I got over the fear. In fact, I started handling the non-venomous snakes and I used to help the boys with the hourly demonstration of snakes for the public, handling them and taking them around, several times getting bitten by the non-venomous ones. I was so involved and happy in my work that I wanted to spend the rest of my time working here. That’s when Rom mentioned turtle walks.

KS: Which year would this have been?

AA: Around 1973–74. So we went to the Croc Bank, walked along with the staff, collected a few nests and brought them back to the Croc Bank for hatching. After I left Snake Park, I got into OTA (Officers Training Academy of the Army), and Brigadier Thyagaraj was the Commandant then. He was also very interested in wildlife and he wanted to revive WWF in Tamil Nadu. Many years before, they had started WWF in Tamil Nadu and it died out without much activity. He took on the Chairmanship of the Tamil Nadu branch. Since I was also interested in wildlife, we had our meetings in Snake Park – all the trustees used to come there.

KS: Who were the trustees of WWF?

AA: I don’t remember all the trustees but it included Siddharth Buch, M. Krishnan, Jagannatha Rao, and Harry Miller. I used to look after the WWF correspondence at OTA. We used to hold our programmes in Dr. Nandita Krishna’s place in Alwarpet. Besides having movie screenings etc., I thought turtle walks were a hands-on experience for WWF members to see something which they’ve not seen before – these huge turtles (olive ridleys) coming out of the sea, digging nests and laying their eggs.

We sent out invitations to WWF subscribers in the beginning and got a good response. The turtles always came out at night. So, I used to take them from Thiruvanmiyur beach, and walk along the beach right upto to Injambakkam (about 8 km). Brigadier Thyagaraj had a cousin in Grindlays Bank. They had their guest house right next to the VGP theme park on the beach. So he got them to give us a place and they built a hatchery there. We used to walk from Thiruvanmiyur right up to this place, and we would bury the eggs in that hatchery. We would number the nests and note down details such as the number of eggs, when it was collected, etc. We would calculate about forty – forty-five days, then go and collect the hatchlings and release them into the sea.

KS: So, what kind of hatchery was this? Was it just a fence…?

AA: It was low, with mesh all around it and open from the top. I managed to find two pictures, one of the turtle hatchery and one at a crocodile release site. I think they were taken by Preston Ahimaz, whom Romulus Whitaker introduced me to at the Madras Snake Park and whom I later married.

KS: Wow. Which year was this first hatchery in the Grindlays Bank compound, do you remember?

AA: Around 1977–78 maybe. Every year during the breeding season December to March, we used to collect eggs and bury them in the hatchery. There was a watchman who rang us if he saw any turtles crawling around after they had hatched. So we used to go with buckets and drums, collect the hatchlings, count them and release them into the sea. It was quite exciting. Then, a lot of students got interested in the “Sea Turtle Walks” and I organised walks for them. Shortly after that, one of the walkers Dipankar Ghosh –a French teacher at Padma Seshadri School – brought his students as well.  After several sea turtle walks with us, he started another club – Prakruti Nature Club – and he used to take people for these turtle walks and collect eggs. That was in the 1980s.

KS: So in the early days, in the 1970s, it was still mostly a Croc Bank activity, right? WWF had still not been established…

AA: Not on a regular basis. Once I started the programme for WWF, it became regular, and that’s when we got the hatchery. That was till Brigadier Thyagaraj was there. After he was posted out, we still had the hatchery for some time, but it somehow all died out, and others took over.

KS: Right. So, the Grindlays’ hatchery would have been there for how long, three or four years?

KS: I think in 1982 or so, the Forest Department set up a hatchery.

AA: Yeah, I heard that they had set up. I don’t know where it was.

KS: By then, I think Preston Ahimaz and R. Bhanumathi (Bhanu), who worked with him at the WWF office, used to take WWF volunteers on turtle walks. The story that I heard was that WWF volunteers would collect the eggs and give it to the Forest Department hatchery, because they didn’t have a hatchery.

KS: Yes, and they were active till the late 1980s and then decided to take down their hatcheries. Reasons unknown. So that’s when we started the students’ group.

AA: How is it now? I mean, in those days it was quite frequent, these turtles coming up. But now with all these lights and things coming up, are there still…?

KS: Yes, very much so. In fact, quite contrary to what we might expect, the numbers seem to have gone up.

AA: The fisherfolk – do they still collect? Because I know one man used to bring turtle eggs and sell it in those days.

KS: Not so much, I think. I think because of the presence of such groups, there are people on the beach on a regular basis. So the fishing communities in that 7 – 8-kilometre stretch are also aware of what’s going on. So, I think there’s much less collection of eggs. In those days, when we started, there was a poacher called Mayavan. I remember we used to walk on the beach and on some days he’d be twenty minutes ahead of us, and we’d find one poached nest after another. He’d just reach it ten minutes before us, pick up the eggs and walk off ahead of us. So, it was quite a challenge.

AA: And there used to be a sea turtle market in Tuticorin on Sundays. Have you heard of that?

KS: Yeah, I heard about that. Have you been there?

AA: Yeah. When I was working in Snake Park, Zai Whitaker, another employee of Snake Park, and me – three of us went there. There were lots of turtles…I don’t remember which species… but they were turned over on their backs. They slaughtered them and people queued up in lines for the meat and blood. They drink the blood raw.

KS: Yeah. I don’t know if the blood drinking is still going on but the market is still there.

The Forest Department occasionally goes and does some raids and all that, so they’re a little more cautious, especially because the green turtle numbers went down because of the heavy exploitation. The green turtle market is very much behind the scene. But ridleys are still sold quite openly. They have a Sunday market or something. There’s one particular village where they catch turtles and any time you go there you can see five to ten carcasses.

So, you also started the WWF camps around that time, is it? How did those get started?

AA: Bhanu, who was also keenly interested in wildlife, and I had the first camp for WWF Nature Club with a bunch of school children in Top Slip. This was around the early 1980s.

KS: And WWF was already active in the west zone, right?

AA: Yeah. In the South, it really started after Brigadier Thyagaraj came and took over. I used to take all the OTA officer’s kids to Guindy Park and had an overnight camp behind OTA. Since Brigadier Thyagaraj was the Commandant, he used to give me all the personnel and the camping equipment – I had everything under my control. I also took the kids on a camp to Mundanthorai Tiger Reserve. We used to go out to a place called Kambakkam. We had a camp there, pitched tents and all. We used to go to small little places. Our first big camp was Top Slip. WWF set up a proper office at C.P. Ramaswamy Aiyar Foundation. Preston (Ahimaz) was the Coordinator and a few others joined, and WWF in Tamil Nadu started slowly building up.

When I first sent out an invitation for the turtle walks to the WWF subscribers, many turned up. I gave them a little talk about the different types of turtles and how you go about this turtle walk. And they said, we thought turtle walk means walking with the turtles. And somebody said, “do we all have to walk like turtles?” [Laughs]. They didn’t know what turtle walk was. But they came and they were very interested. I told them how tracks would look, and how the turtle makes false nests at first, and I explained the whole process to them. And when they came and experienced it, they enjoyed it tremendously. It’s great to be walking on the beach on a moonlit night looking for turtle nests!

KS: Lot of people have come for turtle walks in Madras. A lot of the ecologists who are working around the country today…if you ask them how they got involved with wildlife or ecology, there are two main things: one is that they went to a WWF camp, or they went for a turtle walk. One of those two things.

AA: It is what draws people. They want hands-on experience. Going for camps is quite hard, they have to take-off for so many days, but turtle walks are just overnight. So a lot of people were interested.

KS: Thanks Ann. It was really lovely hearing about your experiences and thank you for being one of the pioneers of turtle walks in Chennai.

AA: It’s been my privilege to do my bit for nature.