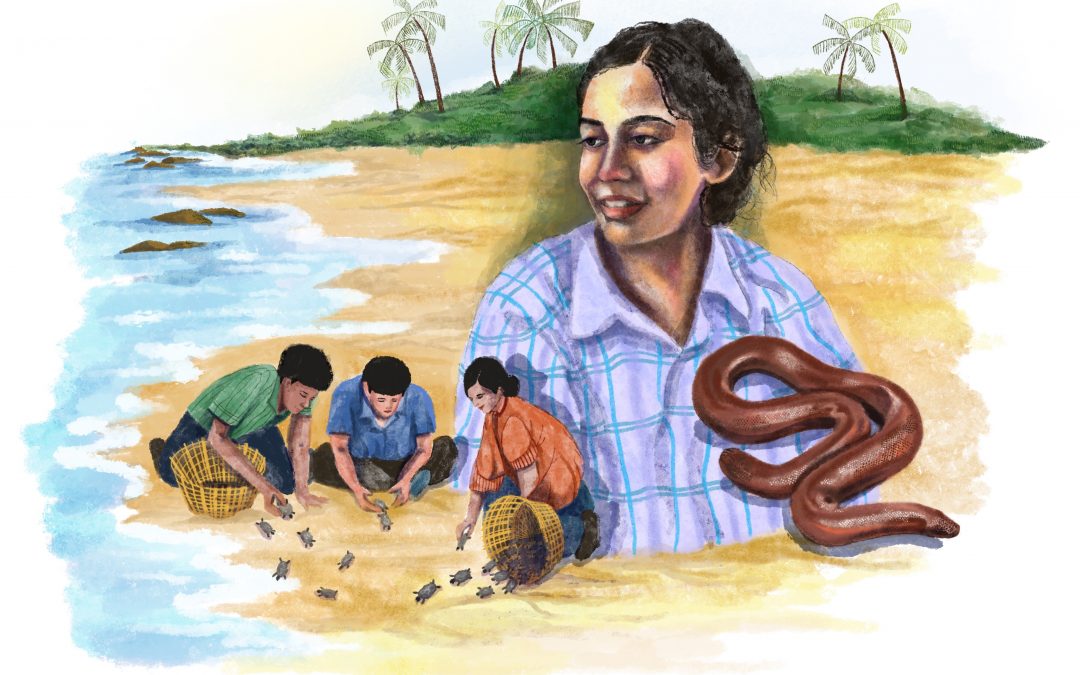 Amukta ‘Amu’ Mahapatra was introduced to the world of wildlife by her father and his friends, and frequently visited various sanctuaries in South India. To get over her fear of snakes and reptiles, she decided to volunteer at the Madras Snake Park, and after some difficult but successful episodes of snake handling, she joined a group of volunteers on ‘turtle walks’ along the coast in Chennai. She described her first encounter with a ridley turtle in an endearing article in the newsletter of the Indian Institute of Technology, Chennai, urging youngsters and students to take action.

Amukta Mahapatra went on to start Abacus, a well-known Montessori school in Chennai in the 1980s, and spent several years conducting Montessori training programs in Tamil Nadu and Karnataka. Though she was never involved with sea turtles directly, she still vividly remembers her turtle nights. Her husband Aditya Mahapatra, composed the music for the turtle song for the ‘minstrels’ of Operation Kachhapa and translated a children’s book, ‘Turtle Story’ authored by Kartik Shanker, into Odia.

KS: As I started working on my recent book,  ‘From Soup to Superstar’, my original idea was to put down information from books, documents and my own experience in the field over the last ten or fifteen years. But between doing historical research – by looking through archives – and talking to people, I thought that talking to people would be more fun, and in the last few weeks I’ve discovered that it’s a really nice way to go about this. So why did someone like you get into turtle walks? Who else was there? What was the scene like back in the 1970s?

AM: I think I was teaching at KFI [Krishnamurti Foundation India, school] at that time, when we started in Poes Garden. I was a wildlife buff and had been going to sanctuaries like Mudumalai and Bandipur since my childhood. We used to do quite a bit of bird watching at that time. I really don’t remember how I went to Snake Park, but I had that natural kind of fear for snakes and lizards and all that, so I told myself I had to get over it somehow or the other.

KS: So, who did you go bird watching with?

AM: With a friend of mine, Arathi, who was also teaching in KFI. And at Theosophical Society, we used to go with Siddharth Buch. We used to cycle up and go birding there or Guindy Park, and sometimes we used to take the kids also. I don’t know exactly how I went to Snake Park, but I landed up there one day and spoke to Rom and said, “You know, I’d like to volunteer.” I didn’t know Rom before that, so it was only then that I got to know him. He said, ‘Yeah, come by,” and we did all the handling of the snakes (and that kind of thing). It was quite awful, I don’t know why (laughs), but somehow, I got over the fear then. The turtle project was ongoing at that time and Rom was doing some of that, along with Valliappan. There was another guy, I think it was Basu, he did some study on gharials…

AM: Yeah, he was there and a few others like Rom’s sister Nina, Priya and Anne Joseph who was looking after Snake Park.

KS: This is interesting. Most of the articles I’ve seen from that period say, “We also thank Anne Ahimaz’, or ‘Anne Joseph’’’, and she’s just mentioned here and there. But everybody I’ve talked to in the last few days has talked about how big a role she played, so I would never have known this from what’s been written down. So, it’s quite revealing actually. Please go on.

AM: Apart from handling snakes and cleaning up the tanks, one of the first few things I did after joining was improving the labels. We labelled everything, even the plants and trees – it was in quite a state. So we said, “Let’s label it so when visitors come, they can understand.” Meanwhile, the turtle project was being discussed, it had already started but wasn’t really public yet. It was more out of Rom’s personal interest in turtles. They were doing night walks and taking the nests to Jean Delouche’s place and burying them. When the hatchlings came out, some people used to go in the mornings to release them. The monitoring and recording of data was mostly done by Valli and Basu. Valli did most of the writing, naming, dating, and tagging for the nests.

KS: So, it was a group of people who were volunteering or working at Snake Park who were doing this mostly over weekends, was it?

AM: No, sometimes during weekdays also. For example, on new moons we would go out to look for turtles. But it was usually Fridays or Saturdays – because otherwise we were working or studying. We would take quite a lot of friends along as well. It was not such a public thing, but say, when teachers came I would ask Valli whether we could take them on walks. The night walk was actually really fascinating. Those days the fisher people were not all antagonistic, they were supportive in some stretches. But I remember Rom saying that some areas were safe and others weren’t, so the presence of a girl would make everyone choose a location which was safe.

KS: So, did you go to college in Madras?

AM: Stella Maris, yes. (I did the Montessori course in Ahmedabad) and came back  to teach at KFI after that (which had just started). I remember teaching the kids about turtles. We also had some tortoises in school, kept them as pets there, some I had at home. It was kind of a nice period. When we could do all that work for about two years.

AM: Yes, and after that I also moved away. So then I lost touch with everybody.

KS: So that was a brief period of involvement with sea turtle conservation.

KS: So do you remember any other things that you wrote, maybe apart from that piece in the IIT newsletter?

AM: No, I don’t remember. Maybe just for Snake Park or when we took children for observations, we did some worksheets and all that.

But I have pictures [from those days] of turtles, the hatchlings and people. Maybe some pictures of Anne and a few other people but those are from Bandipur, nothing to do with turtles really. They are from a camp that we went to in Bandipur.

But this was not a scientific thing, you know, we were just wildlife enthusiasts.

KS: I think a lot of people who’ve passed through the Madras turtle scene have probably been more enthusiasts than biologists. Well, this was an interesting discussion. If you remember anything more please feel free to send an email to me. Thank you for your time.

I heard recently that Valliappan passed away. We need to acknowledge his contribution in some way. He was at that time studying at CLRI and had a scientific approach to the turtle conservation programme. He could also write quite well. He brought in other students too from the colleges around.

Towards the end of these two years perhaps, Zai came into Rom’s life and to Snake Park. She put in efforts to clear and tidy up the place and put everything in order. There was so much to do on a regular basis, besides managing the animals, doing shows for people who came in….she also helped to strengthen the link with the Irulas that Rom had established.