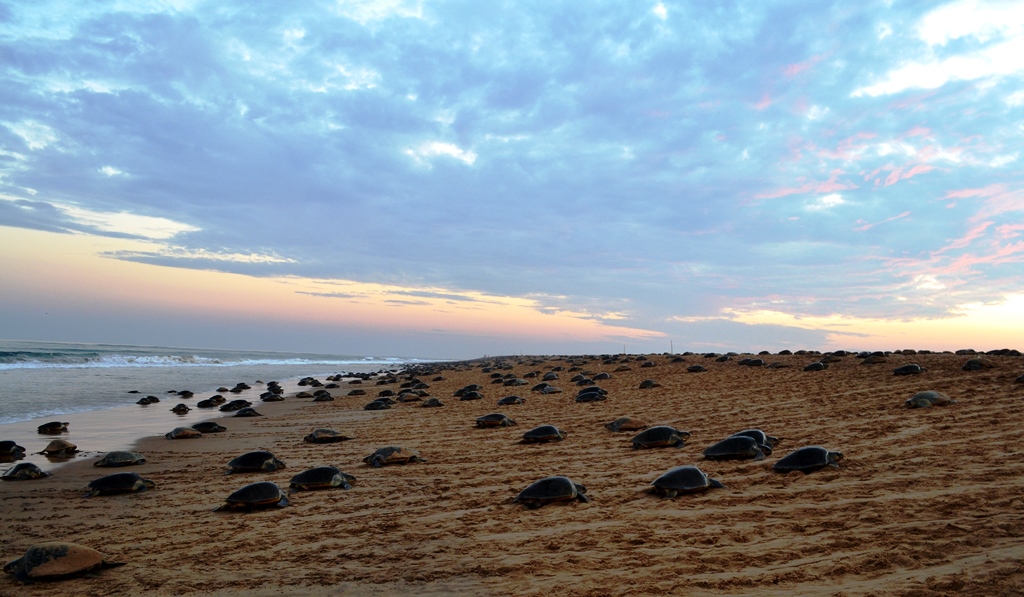 You are supposed to start with a turtle track, maybe a nest or the remains of the eggs. You are then supposed to move on to seeing a live olive ridley turtle and then an arribada. That’s the progression to studying the turtles; but here I was, surrounded by thousands and thousands of turtles on a sandbar in Odisha, never having seen an olive ridley in my life. No amount of photographs had prepared me for what was actually before me. It’s a rare sight… as rare as any other on the list of wonderful events of Indian wildlife. Yet, so few know and fewer have seen this event.

The interesting thing about ecology is that when you think you have seen and understood it all, there is always something that remains enigmatic. It is this little flame that drives us to continue asking questions. Olive ridleys, and their mass nesting phenomenon, have been studied and well documented for decades now, yet we don’t have the answers to some of the basic questions. Why do the turtles come to a certain beach? Why this time of the year? How do they find their way back after decades, leaving the beach on a quiet night? People have spent their life trying to answer these questions, and here I was, standing on the cold sand asking the same.

We know that the turtles come. We know from hindsight when they come, what we don’t know is why they choose to come at that time of the year. Furthermore, the holy-grail is to be able to predict, with some degree of accuracy, when exactly they will come next. Ask the people who have been there before and you will get the most diverse answers. Some will tell you they can ‘smell’ the approaching arribada. Some will tell you that it will happen when the wind changes. Some say the tides are not right yet, and then there will be some who will unabashedly say that they can feel it in their gut.

Alas, science does not accept the gut! It needs numbers, figures and statistics. So I set upon a journey to understand the arribada before I made an attempt to demystify it. Like everyone else, I started off with patterns which people believed were either characteristic of the arribadas or individual theories about the event, only to have them proven wrong one by one. 2013 was to be the year when most of our ‘theories’ would be thrown into the sea. First went the seasonal wind direction theory that the arribada starts when the south-west monsoon winds start. 15th of February, 2013… the winds had not changed but the arribada had begun. Then there was this theory about turtles nesting only during the night. 17th of February, the turtles were on the beach at 2 pm in the afternoon. So much for that! The wind smellers were nowhere in sight either. To top it all, the 2013 arribada had the highest number of turtles recorded for Rushikulya on a single nesting day. So, there went the apocalyptic theories of declining populations and dwindling arribadas. Just when you think you have a lot of things figured out, the turtles decide to prove it all wrong.

It has been a year since that night. Another arribada has come and gone, and we are still digging through the data and applying the statistical tools, but the turtles have chosen to remain as enigmatic as they were to the ones who first saw them on the sandy shores decades ago.  Nevertheless, I am still hopeful that the Eureka! moment will come sooner than later.

Akash Verma is a Research Assistant at the Centre for Ecological Sciences, Indian Institute of Science, Bangalore.