Every field ecologist has their own special “Man Friday”, the local informant and trusted field assistant at their respective field sites. Dhambru Behera was “The Man” at the Rushikulya mass nesting beach in Odisha. This humble, traditional fisherman by trade met a researcher surveying the entire Odisha coast looking for olive ridley nesting site in the early 90’s and heard about the mass nesting phenomenon that took place in the northern part of Orissa at the Gahirmatha sanctuary. Anyone who has met Dhambru has heard the story of how he and his brother noticed this happening at Rushikulya and in times before mobile phones, Dhambru took the responsibility of travelling all the way to Kendrapara and inform Bivash Pandav about the arribada happening at Rushikulya. This was the story behind the discovery of a new mass nesting site in Odisha in 1992. 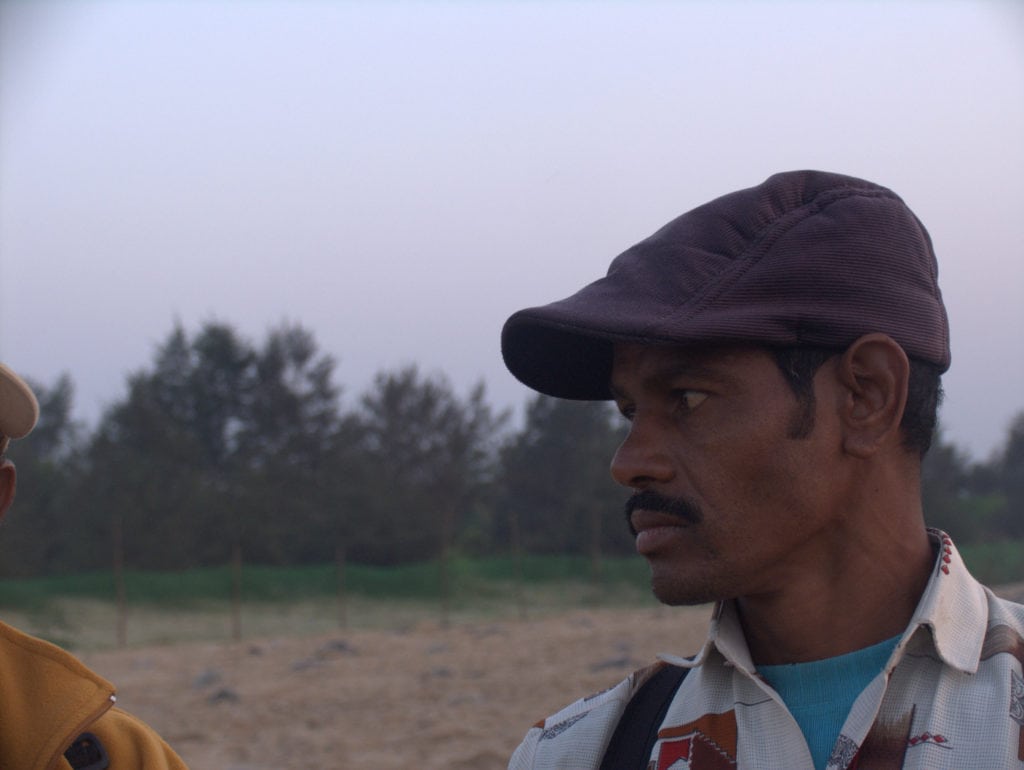 This was the beginning of the love story between Dhambru and the olive ridleys that nested in Odisha. Along with Bivash Pandav, he travelled to the different nesting beaches in Odisha and learned all that he could about them. Every researcher who followed Bivash to work at Rushikulya found a man, at the Purunabandha village, eager and waiting to join them to work with those turtles he cared so much about. A walk along with Dhambru on the beaches of Rushikulya is never without stories of things that happened around the area whether it is about the fishes in the sea or local temple festivals; there is always something new to learn about the olive ridleys from all his years of experience accompanying researchers who visited the beach. 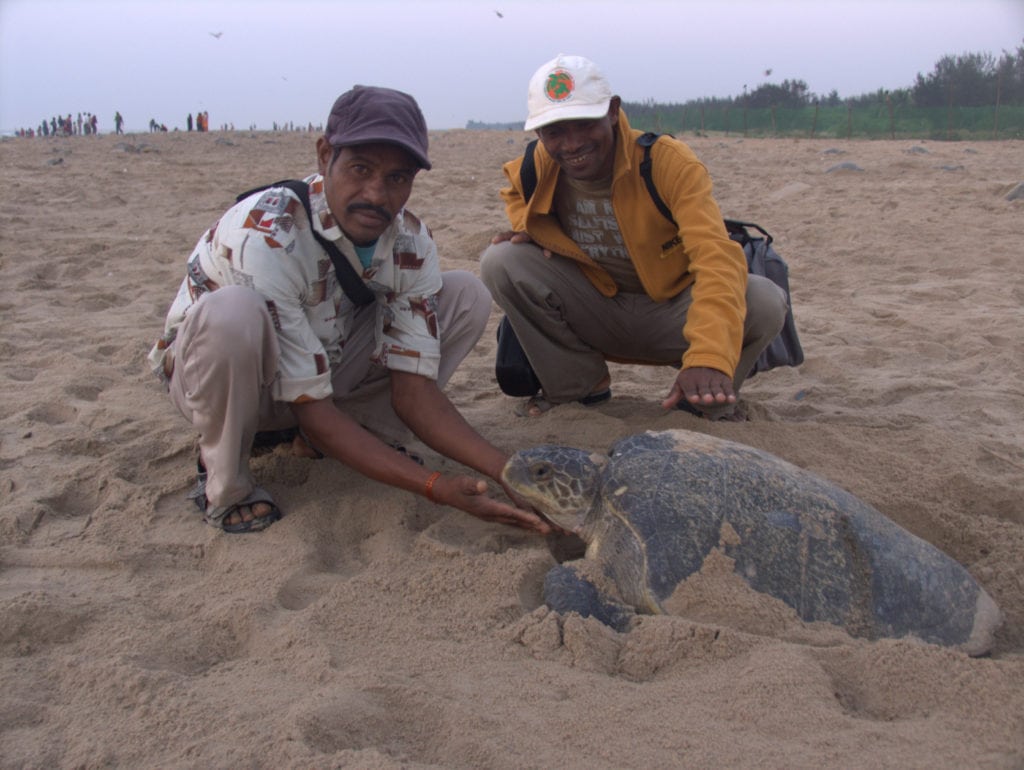 Every project that took place at this site has a special fingerprint of Dhambru attached to it- whether it was the systematic arribada census methods, flipper tagging of turtles, protecting hatchling disoriented by light on the beach, blood sample collection for genetic analysis, satellite telemetry, managing hatcheries or offshore sampling for turtle congregations. Dhambru has always been there seeing, learning and devising new ideas for the conservation of the ridleys on the Odisha coast. These contributions by him have not been without reward and the International Sea Turtle Society felicitated him with the President’s award at the 2010 international sea turtle symposium at Goa. The award was something he cherished and displayed proudly at the entrance of his humble home in the village. 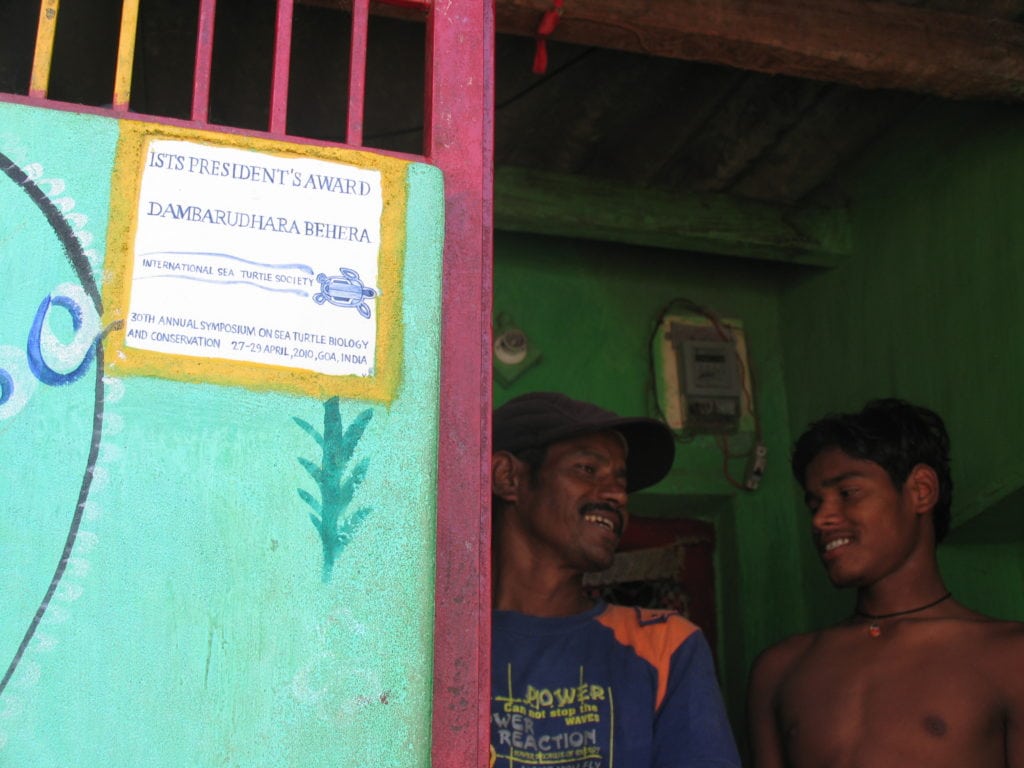 One particular story that comes to my mind from my experience working along with Dhambru, with regard to his insight on the turtle’s behaviour, was during the satellite tracking of turtles by the Wildlife Institute of India in 2009. After capturing a mating pair in the offshore waters of Rushikulya, the first ever male ridley turtle to be attached with a satellite transmitter from the Indian region was released close to the surf for it to crawl towards the water. The female we had captured along with him was anxious to get away to the safety of the sea, away from her captors who had kept her overnight and stuck something on her back with an antenna sticking out. The male, however, was ambling away slowly and that was when Dhambru realised and told the rest of the experienced research team, “the male doesn’t know to walk on the sand, he left the beach as a hatchling and has never seen the beach again”. This was when it dawned on the rest of us, standing on the beach watching the turtle struggle, while Dhambru ran across and guided the male turtle towards the sea. 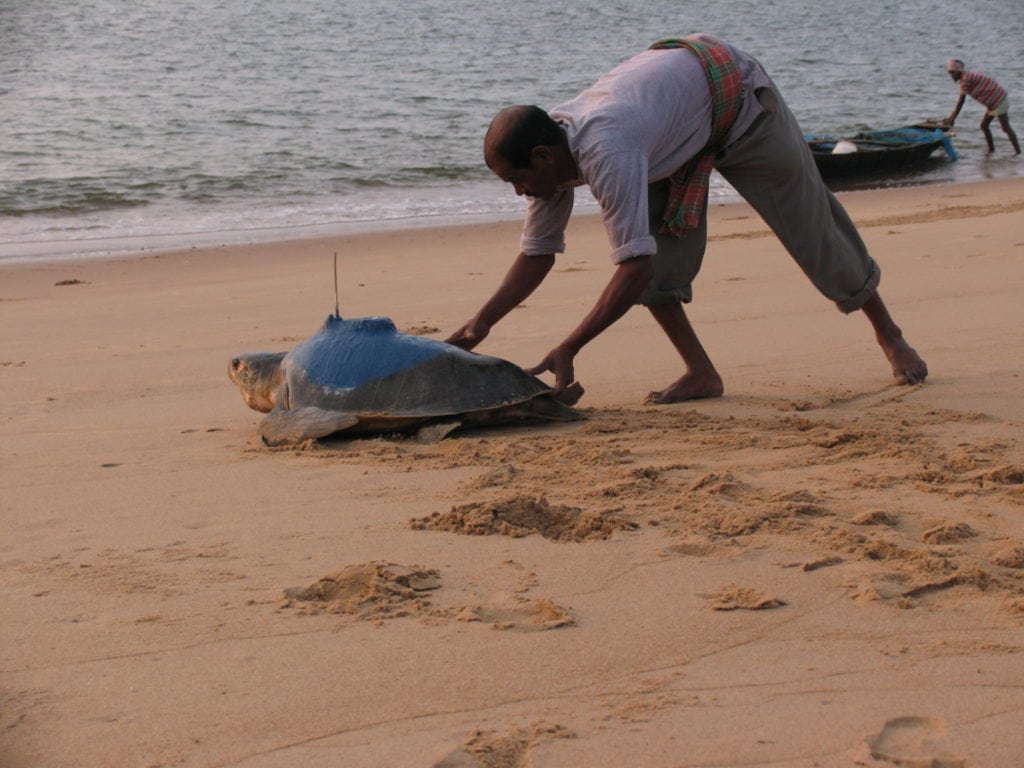 I am sure everyone who has worked along with Dhambru has several such stories to tell about his wisdom, quick wit and dogged hard work in the field. This has inspired 2 of his sons, Bipro and Judishtir, to work on these turtles with the researchers who came in the later years.

Currently, after suffering from a brain haemorrhage and paralysis to the right side of his body, Dhambru is battling away to get back to normal at a hospital in Berhampur. Hearing this news about his health has brought back all the memories of all the times he has been alongside with me in the field and all the things that I learnt from him. I hope and wish for his quick recovery because I am sure the turtles that arrive to nest in Rushikulya will miss their loving protector and friend on the beach.

All the best, Dhambru Behera.

Muralidharan M is a Research Assistant with Dakshin Foundation and works on Olive Ridley turtles in Odisha.