As the summers went by and my knowledge of sea turtle biology grew, I became most fascinated with what we didn’t yet know about sea turtles. Observing hatchlings as they entered the ocean, I wondered where their swimming frenzy would take them. The time between their departure from the beach as a hatchling (4-6cm curved carapace length) and their appearance at feeding grounds as a juvenile turtle (35-40cm curved carapace length) is known as the “lost years”; during this time most turtles are assumed to undertake long migrations in the oceanic gyres. However, I worked with a species that did not spend time in the open ocean. Flatback turtles (Natator depressus) are restricted to the Australian continental shelf, and the hatchlings are believed to stay within coastal waters. Their close proximity to shore made them a wonderful species for me to study and allowed me to combine two of my loves: turtle research and sea kayaking.

After much planning, which included applying for three government permits, I was able to begin my study in 2005. A boat carrying two kayaks, research and camping equipment, a week’s supply of food and water, myself and two friends transported us from the mainland to a small island 13km offshore. Peak Island is one of the largest flatback turtle rookeries in eastern Australia, and was to become my home for 13 summers of research. A small, rocky uninhabited island, it has no shelter or water source. We established camp and organised our research gear, preparing for our first day of tracking. 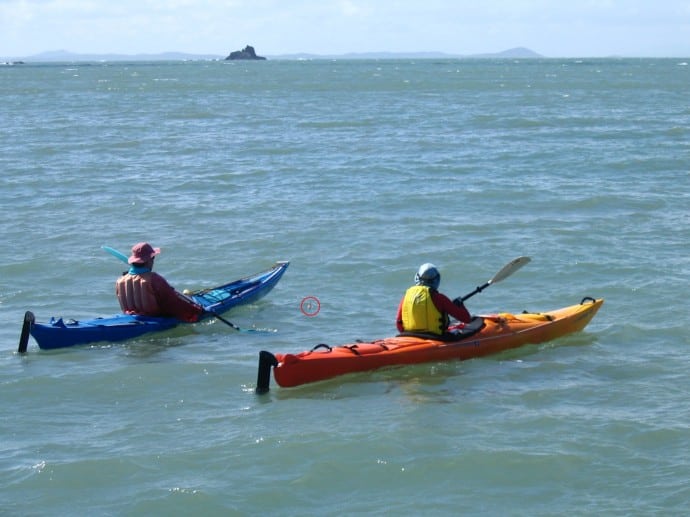 Before dawn the next day, I stood on the beach laden with my kayaking safety gear, GPS and waterproof field notebook, a hand-held radio for communication, and radio antenna to track the hatchlings. I had fitted several hatchlings with a specially designed tracking apparatus that included a brightly coloured float and radio transmitter, thus allowing me to follow them visually for most of the study but also to find them using radio telemetry if I lost sight of the hatchling between waves. The tracking apparatus had a quick release mechanism that would pull free if it became entangled in rocks or coral, so I was certain the hatchlings would not be harmed during the study. Once my support boat had appeared on the horizon, I carefully released the first hatchling at the waters’ edge and watched it begin to swim. I then launched my sea kayak.

Instead of the clear skies, light breeze and smooth seas I had hoped for, we paddled into 20 knot winds and 3 foot of swell. I quickly discovered that it is possible to feel very sea sick in a kayak. Swallowing hard to keep breakfast in my stomach I slowly followed the hatchling. I paddled backwards and sideways to avoid getting too close and disturbing normal swimming behaviour or attracting predators. Every 10mins I paused, juggling a GPS, compass and notebook, to record hatchling location and swimming direction. In case my kayak overturned and all my gear disappeared to the bottom of the ocean, I also radioed this data through to volunteers on the support vessel, who carefully recorded everything while battling seasickness themselves.

After each tracking period ended, I returned to shore to begin following another hatchling. While at sea, several bumps on the bottom of my kayak reminded me that, while I was watching the hatchlings, something larger was watching me. Hours of paddling and scribbling GPS coordinates while clutching my equipment tightly resulted in me ending each day crawling from the kayak with cramped legs and hands.

Andrea D. Phillott is a biologist and Associate Professor at the Asian University for Women in Bangladesh, and co-editor of the Indian Ocean Turtle Newsletter. She does not believe her fascination with sea turtles will ever end.