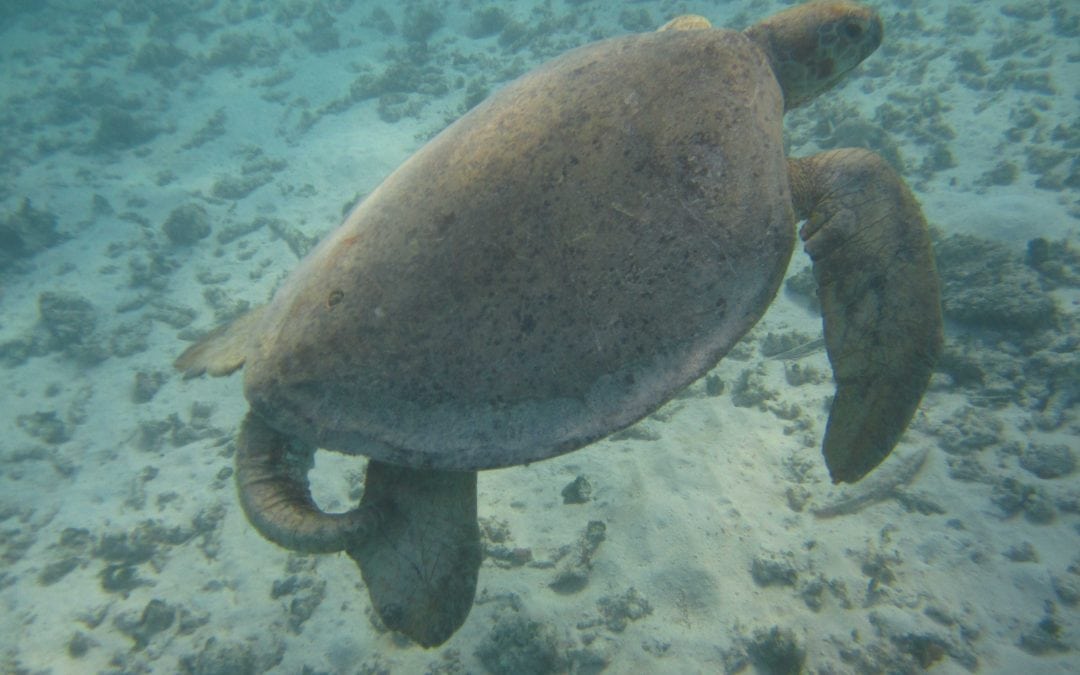 The male green turtle with a small hole in his carapace swam ahead of us in the Kavaratti lagoon without the least concern about our presence. Bharti, my Ph.D. student, and I followed him for nearly half an hour. Male green turtles are known to make amorous advances towards almost any swimming object, but I didn’t warn Bharti until later. This guy hangs about in front of the Sandy Beach cafe, and does not at this point of time in life, seem to have a particular interest in courtship.

Rohan Arthur and his team have been studying green turtles in the Lakshadweep islands, especially Agatti, for the last few years. Rohan, by his own admission, does not study sea turtles at all. He works on the things that eat sea grass. And of course, it just so happens that one of the things that eats sea grass in these islands (and indeed across the world) is, hold your breath, green turtles. Those large cuddly – well, alright not cuddly but they do have the prettiest faces…..for sea turtles – iconic flagships of conservation.

In the Lakshadweep, green turtles have been doing the damnedest thing. They have been destroying sea grass meadows. In Agatti, where Rohan and his team counted 550 plus turtles during a count a few years ago, they have decimated the meadows. Much as elephants do to tropical forests and savannah. But who cares about grass anyway – whether it’s in the sea or on the land ? It’s these large charismatic animals that need saving. In Agatti, it turns out, the fishermen care about the seagrass. They firmly believe that their decline in fish catch is related to this increase in green turtles, and the consequent decline of sea grass, which are breeding areas and juvenile nurseries.

A male green turtle hangs out in the Kavaratti lagoon. Photo: Kartik Shanker

But why did green turtles increase in number ? It could be that Lakshadweep enforced the Wild Life Protection Act’s stringent rules on killing of sea turtles. The muslim population of the islands do not eat sea turtles or their eggs, but they were occasionally killed for their fat which was used as caulking for boats. Or, as Peter Richardson of the Marine Conservation Society in the UK suggests, it could be due to a decade or more of conservation in Sri Lanka. Peter and his collaborators, the Turtle Conservation Project, Sri Lanka’s award winning conservation organisation, have satellite tagged several green turtles and some of them made their way to the west coast of India and to the Lakshadweep. Thushan Kapurusinghe, Lalith Ekanayake and their colleagues and co-workers have been working at a number of beaches on the west coast of Sri Lanka towards nest and habitat protection. Could their efforts have led to this increase in green turtles in nearby foraging habitats ? More interestingly, could conservation in one location have led to conflict in another ?

But the turtles are not done yet. In the last couple of years, Rohan’s team has documented a precipitous decline in the number of turtles in Agatti. Less than 50 during the last count; though this is just an index and not an absolute number, it still represents a significant decline. And simultaneously an increase in the lagoons of Kadmat and Kavaratti. Did the turtles just finish one field and move to greener pastures ? How did they know when and where to go ? Bharti hopes to address some of these questions as part of her Ph.D. We will find answers to some of those questions, and just as surely, turtles will find new ways to mystify us.

Kartik Shanker works on sea turtles on remote beaches and scattered islands. He is based at Centre for Ecological Sciences, Indian Institute of Science, Bangalore and Dakshin Foundation.