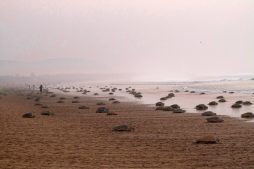 Project title: Nesting of Lepidochelys olivacea along the south Chennai coast with emphasis on habitat characteristics

Abstract: The nesting of olive ridleys (Lepidochelys olivacea) along a 50 km beach in the south Chennai coast was studied from January to March 2004. Fortnightly surveys were done on foot during 0600-0830 hrs to locate tracks, nests and carcasses of turtles that had been washed ashore. Nest location, with distance of nest from high tide line, river mouth and village were recorded. Coastal vegetation was sampled every 500m and at each site used for nesting. Peak nesting was recorded in the first fortnight of March, and the estimated nesting intensity of the area was about 10.8 nests/km. A total of 135 carcasses of turtles were located and mortality was largely due to incidental catch in fishing gears. Number of nests located was negatively correlated to various distance categories from village (r=-0.443, p=0.050, n=20), high tide (r=-0.628, p=0.039, n=11) and river mouth (r=-316, p=0.034, n=44). Turtles preferred to nest near Ipomoea pescaprae (sw=0.445) compared to Spinifex littoreus (sw=0.207). Further studies on nest site selection would provide pertinent information for both sea turtle conservation and plan for coastal area development.

Objectives: To collect data on the olive ridleys nesting in the south Chennai coast and relate these to selected habitat parameters.

Key findings: A total of 38 tracks were recorded in the fortnightly sampling between January to March 2004 of which 36 tracks led to successful nesting of the female olive ridley. Average turtle nests/10 km/day was 1.2 and estimated turtle nests for the entire season (January-March) was 540 (10.8 nests /km). Peak nesting was observed in the first week of March, 2004. Of the 36 nests, 29 were predated by jackals, dogs and humans. Data on nest site with respect to distance from the nearest river mouth, village and river mouth reveled the fact that nest site selection was indeed determined by habitat variables. Vegetation data based on point sampling showed that Spinifex littoreus covered a larger portion of the area followed by open sandy beaches without any vegetation. Ipomoea was the most preferred vegetation for nesting followed by open beach with no vegetation. Carcasses of five green turtles (Chelonia mydas) were recorded along with 134 other olive ridley carcasses.

Degree(s) resulting from project: J. Subramanean received his Masters degree in Ecology and Environmental Sciences from Pondicherry University after the completion of the work.

Potential areas of future research: Beach management for conservation of habitat and nests is an important area of potential research for the future.