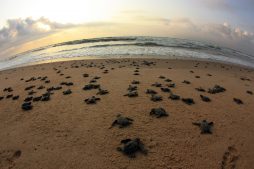 Abstract: The olive ridley sea turtle Lepidochelys olivacea is known to nest both sporadically and in arribadas in the Indian coastline. Of the three mass nesting sites on the Orissa coast, the Rushikulya  rookery  has  been  considered  as  a  key  factor  in maintaining  the  future populations of the Ridley’s in the Indian coast. Though several studies have been carried out on various ecological aspects of the species along the Orissa coast this study looked into a finer scale of behavioural patterns exhibited by the females while selecting the nesting sites. Other aspects  that  are  looked  into  in  detail  in  this  study  included  the  various impacts  of anthropogenic activities near the nesting habitat of the turtles including the impact of nest predators.  Any developmental projects along the rookery areas should consider its potential impact on the nesting turtles and hatchlings.  Illumination and plantations along the rookery could be harmful  to  the  nests  as  well  as  hatchlings,  which  can  be  avoided or minimised for the successful conservation of Olive Ridley in the Indian Ocean.

Objectives: (1) looking into the behaviour of the nesting females in making active choices while choosing site for nesting upon coming ashore,  (2) Observations of hatchling disorientation in the various sections of the beach at Rushikulya with respect to the lighting conditions associated with human activity  (3) Temporal and spatial distribution patterns of the nest predators along the entire nesting season of the olive ridleys.

Key Findings:  The observed sporadic nesting turtles crawled an average of 47.39 m from the waterline before nesting (Range = 10.7(102m, SD = 21.0481, n = 70). Tests were conducted to check for the possibility of whether turtles were actively choosing their site of oviposition while compared to random placement over varying distances. Beach slope and soil temperature were not found to be significantly different from the nesting sites (Slope – F = 1.289, Temperature – F = 2.241, df = 8 P>0.05) while compared to sites along the track of the nesting turtles, whereas pH and moisture were found to be significantly different from the nest-site to all sites prior to them (pH – F=37.640, Moisture – F = 44.208, df = 8 P<0.05). This shows the possibility of both pH and slope to be amongst the possible proximate cues used by a turtle in deciding a final nest. The  effects  of  beach  lighting  on  the  disorientation  of  turtle  hatchlings  at  this  site has already been studied at various levels and this study re-affirms the results of the previous studies by  including  the effects of  lighting acting upon various distances away from  the water-line  as well  as  different  photic conditions  present  along  the  beach and  from  the adjoining villages. With areas near the villages showing maximum disorientation while compared to areas shielded from light by Casuarina plantations.  Associated  human  activities  near  the  Rushikulya  rookery  could also act in  supporting  and maintaining  populations  of  certain  animals (feral dogs, jackals),  which  have had an increased threat to turtle nests. The plantation of Casuarina adjoining the nesting beaches could also act in providing refuge to such predators apart from the known effect of changing the geomorphologic profile of the beach.  These predators are known to be able to thrive even in marginalised habitats sustaining their numbers near human occupied areas. These plantations may thus also be aiding an artificial boom in their numbers thus having an increased impact of their predation on turtle nest  while compared to natural levels of predation loss.