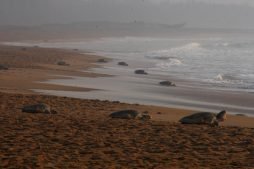 Objectives: To monitor offshore and nesting populations of olive ridley turtles and to assess the impacts of climate change on hatchling sex ratios at Rushikulya, India

Abstract:  Olive ridley turtles nest en masse on the pacific coast of central America and in Odisha on the east coast of India (though a small mass nesting site has recently been recorded in the Andaman Islands). The two main mass nesting beaches in Odisha are Gahirmatha to the North and Rushikulya to the South. We have been monitoring this population since 2008, including a range of parameters relevant to conservation. We monitor offshore populations during the breeding season to determine spatial and temporal variation in abundance and distribution. We monitor solitary nesting and conduct a census during mass nesting to assess population trends. We also measure hatching success and body size as indices of population health. Finally, we measure temperature and estimate hatchling sex ratios to assess the impact of climate change. Since mass nesting events likely contribute most of the hatchlings that determine the fate of the populations, skewed sex ratios on these beaches could have long term impacts on the population along the east coast of India

Key Findings: Mass nesting events have occurred during most years since 2008, with > 100,000 turtles recorded during many years, suggesting that this population is stable or increasing. However, the mean incubation temperature of nests laid during mass nesting events at Rushikulya have typically exceeded pivotal temperatures, indicating the production of female biased sex ratios.