Monitoring green turtles (Chelonia mydas), their movement and habitats in the Lakshadweep Islands 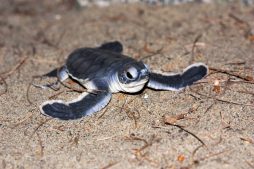 Seagrass meadows in many lagoons of Lakshadweep have decreased greatly due to intense grazing by green turtles. Thalassia and Cymodocea, the two major species of seagrass found in the lagoons have reduced in their cover.   This decline is a consequence of an increase in the numbers of green turtles in the region over the past two decades. This has severely impacted abundances of seagrass dependent fish important for the subsistence of local fisher communities leading to resentful attitudes towards green turtles. Despite their impact on seagrass meadows, the foraging and movement patterns of the green turtle populations found in the Lakshadweep archipelago remain poorly studied.

Building on the work of Nature Conservation Foundation (NCF), we are monitoring the distribution of the green turtle populations, examining their diets and investigating seagrass characteristics and distribution in the lagoons of Agatti, Kadmat and Kalpeni. We aim to elucidate the movement ecology of the green turtles in Lakshadweep through a combination of telemetry, and identification of individuals from photo and flipper tags. This will be used to understand aspects of their foraging patterns and habitat use which are vital for making informed conservation decisions.

The distribution of turtle densities over time indicates that the populations move within the archipelago exhausting resources at one island before moving to the next. The density and cover of particular seagrass species has declined in various islands due to overgrazing by turtles.