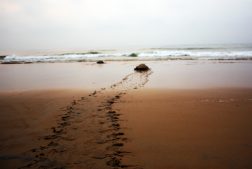 Project title: Lighting the way: Towards reducing misorientation of olive ridley hatchlings due to artificial lighting at Rushikulya, India

Project partners: Centre for Ecological Sciences, Indian Institute of Science and Ashoka Trust for Research in Ecology and the Environment, Bangalore

Abstract: Sea-finding behaviour in sea turtle hatchlings is modified by the visual cues provided by artificial beach front lighting. The consequent landward movement of hatchlings in response to coastal electric lighting reduces their survival rates. We assessed the potential impact of coastal lighting at Rushikulya, an important mass nesting site of the olive ridley sea turtle (Lepidochelys olivacea) in the Indian Ocean region. We examined the response of hatchlings to light characteristics in an experimental setup, as well as to the existing lighting regimes along the beach, using arena trials. Previous studies on other species indicate preferential orientation towards low wavelength and high intensity light. Our study confirms these preferences among hatchlings from the Indian Ocean population of olive ridleys. In addition we also found that wavelength and intensity could have an interactive effect upon hatchling orientation. Hatchlings at the study site respond both to visible point sources of light and to sheer glows of light. Though beach plantations of introduced Casuarina equisetifolia are generally considered to have negative impacts on sea turtle nesting beaches, we found that they acted as an effective light barrier when planted about 50 m away from the high tide line. We developed a model of the expected impact of artificial lighting on hatchling orientation during mass hatching events of previous years, and predict as much as 50% misorientation in some years. We also developed a map representing the misorientation of hatchlings due to artificial lighting based on arena trials in different regions of the beach. The results of the study helped identify focal areas for light management on the beach, which could be critical for the survival of this population.

Objectives: To determine differential response of olive ridley hatchlings to distinct wavelengths and intensities of light, both in experimental and in-situ conditions.

Potential areas of future research: This work has served as a basis for future research on the fate of hatchlings that are misoriented by artificial light. As their fates could be location-specific, more research has to be done to quantify the full impact of light pollution on a given population of olive ridley turtles. Further research on aligning light bulbs to more turtle-friendly wavelengths and intensities as described in our study, to be used along beachfront development, will greatly reduce its adverse effects on sea turtle populations.