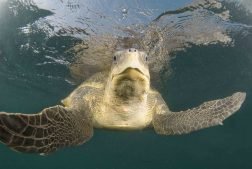 Abstract: Olive ridley sea turtle (Lepidochelys olivacea) nests in low densities all along the east-coast of India. However, the most important nesting beaches lie in Orissa where the mass nesting occurs. Three of the world’s six known major mass nesting beaches of olive ridley occur in Orissa. The three mass nesting beaches in Orissa at Gahirmatha, Devi River mouth and Rushikulya together support a significant portion of the world’s olive ridley population. Although the nesting population at Gahirmatha has been the focus of several studies over the past two decades, little is known about the turtles at the other two rookeries in Orissa. 1,767 olive ridley mating pairs were captured in the coastal waters off Gahirmatha of which 1,657 males and 1,616 females were double tagged using monel metal flipper tags. On the beach, 10,327 nesting females were tagged during the study. The findings of this study strengthen the case for establishing a network of protected areas for sea turtles along the Orissa coast. This study proves the fact that olive ridleys in Orissa use more than one beach for nesting during the same as well as subsequent breeding season. Based on the movement of turtles between nesting beaches and in the coastal waters off Orissa obtained during this study it is proposed that the entire sea turtle population visiting Orissa coast should be considered as a single conservation unit. Therefore protection of all the three mass nesting beaches as well as their coastal waters are extremely crucial for the survival of sea turtles in Orissa which could well be a single population. Further the analysis on incubation success data strengthens the importance of smaller rookeries like Rushikulya. The large-scale mortality of adult turtles in Orissa recorded during the study is a matter of utmost concern and need to be addressed immediately. The need for strengthening the patrolling in offshore waters where turtle congregation occur and the use of Turtle Excluder Device are some of the steps suggested that needs to be taken up immediately. Turtle congregations like that in the coastal waters off Gahirmatha need to be located along the rest of the Orissa coast so that adequate protection can be provided to the turtles in the offshore waters. Keeping in view the intensity of artificial illumination at Rushikulya rookery, the use of low intensity lights is suggested to mitigate the problem. Finally, this study recommends continuous monitoring of the turtle population in Orissa which is undoubtedly under great threat.

Objectives: To monitor the turtle population all along the Orissa coast and addressing certain key issues related to their conservation. The offshore aggregations of olive ridleys in the coastal waters off Gahirmatha as well as the nesting populations at the three rookeries were studied during 1995 – 1999.

Key Findings: The study reveals that straight carapace lengths of males and females at Gahirmatha are 66.2 ± 2.9 cm and 66.7 ± 2.4 cm respectively. When compared with sizes from other populations it seems clear that average lengths of carapaces and range of sizes obtained in this study are larger than other geographical regions. Both male and female olive ridleys showed strong fidelity to breeding ground. Upon re-migration ridleys tagged at Rushikulya rookery re-laid their eggs within 100 to 300 m of their previous nests with a range of 0 to 1,000 m. Nesting females also showed some degree of movement between nesting beaches, both within as well as between nesting seasons. The range of such inter-rookery movement of olive ridley in Orissa varied from 35 to 320 km (n = 6). Recovery of 14 tagged turtles from Sri Lanka and three from South Tamil Nadu (Gulf of Mannar) provides a clue about the non breeding areas of olive ridleys nesting in Orissa. One year re-migration intervals were the commonest for ridleys of both sexes with the second and third year intervals are correspondingly less common. Tag recovery from dead turtles washed ashore the Orissa coast also showed considerable movement in the coastal waters off Orissa. The location of olive ridley mating pairs, sighted during the study, in the coastal waters off Gahirmatha were recorded and the extent of distribution was obtained by drawing a Minimum Convex Polygon around the turtle locations. Mating pairs were found to be aggregated in an area of 52.58 sq. km (100% MCP) in the coastal waters off Gahirmatha and the area of maximum utilization was 27.52 sq. km (90% Harmonic Mean). All the sightings of mating pairs recorded during the study were within 5 km of the coast line. All the observed mating took place within a depth of 20 meters. Turtles nesting in Orissa showed a distinct temporal pattern of nesting with most of the nesting taking place during neap tidal nights. A drastic change in beach profile was observed at the Nasi rookery, Gahirmatha during the study. In total, 34,469 and 77,208 eggs were examined respectively at Gahirmatha and Rushikulya rookery to determine the incubation success. The mean percentage hatching success and emergence success at Gahirmatha varied from 47.7 to 94.4 and 39.8 to 84.3 respectively. Similarly, the mean percentage hatching success and emergence success at Rushikulya varied from 83.8 to 97.01 and 69.78 to 96.1 respectively. The overall man hatching success of the nests in the whole period of study were 63.5 ± 30.4 (range = 0 to 100, n = 277 nests) and 95.01 ± 7.03 (range = 39.7 to 100, n = 600 nests). A significant difference in hatching success (F = 304.137, df = 1, p < 0.001) as well as emergence success (F = 282.127, df = 1, p < 0.001) was observed between Gahirmatha and Rushikulya. Of the two mass nesting beaches (Gahirmatha and Rushikulya) regularly monitored during the study, extensive beach erosion was observed at the Nasi rookery, Gahirmatha. Beach erosion resulted in loss of almost 59% of the total nesting area at Nasi rookery, Gahirmatha. The disorientation of turtle hatchlings at Rushikulya was prevalent at Rushikulya rookery. During the study, the Orissa coast witnessed an exponential increase in numbera of dead turtles. In total 46,219 adult olive ridleys were counted washed ashore the Orissa coast during the study. All the dead turtles counted during the study were adults. The number of dead turtles counted in the survey sectors showed a strong correlation with the number of mechanized fishing vessels operating in their respective coastal waters.