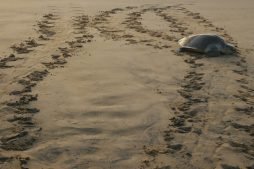 Abstract: Beachfront lighting is possibly the greatest threat to the breeding activities of olive ridleys in this area. Over the last 10 years Southern Chennai has been witness to a number of developmental changes along the coast. Residential colonies have spread along the coast year after year. Development has always been accompanied by lighting. During 2003-2008 especially, have shown a rapid increase in the number of lights in the study area. The local government has also recently proposed a large project, which will involve construction of roads along the coast of Chennai, cutting across the nesting habitats of the olive ridley. Studies have shown that lights affect nesting turtles and the introduction of lights in a nesting habitat would cause turtles to abandon nesting and avoid areas where beachfront lighting is intense (Horrocks, 2001). Furthermore, when the hatchlings emerge from their nests after 45 days of incubation, these positively phototrophic animals are attracted to the beach front lighting and head inland.

Objectives: To see if there is any correlation between coastal development and lighting with nesting patterns of the olive ridleys over the last 5 years in this part of the Chennai coast.

The main aim of the study was to see any: