A study on the population dynamics 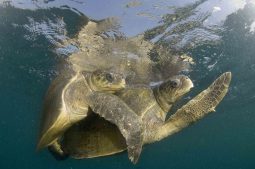 Abstract: Gahirmatha undoubtedly supports a huge nesting congregation of olive ridleys in Orissa. However, the importance of smaller rookeries like Rushikulya cannot be ignored. The nesting beach at Gahirmatha is rapidly getting fragmented, whereas the beach at Rushikulya rookery is a stable one. Keeping in view the rapid alteration of nesting habitat at Gahirmatha, the Rushikulya beach emerges as an important rookery that can help in sustaining a stable population of ridley turtles in the long run. Therefore, suitable sea turtle conservation and management plans should be prepared for the Rushikulya rookery and implemented by the concerned wildlife, fisheries and other appropriate agencies for safeguarding the olive ridley population. Data on olive ridley turtle migration and movement from Orissa suggest that they use multiple habitats for breeding and mass nesting. Thus, protection of isolated beaches is insufficient for population sustainability because olive ridley turtles in Orissa use multiple beaches for nesting. The genetic study on olive ridleys of Orissa supports hypothesis that the populations that are nesting in Orissa could be a single population dispersed into the three rookeries along the coast rather than three different populations. Therefore, it may be necessary to pool data from the three rookeries while estimating the mass nesting population in Orissa. Also, it is clear that there is heavy mortality at the Gahirmatha and Devi rookeries. Therefore, shared concepts should be focused on all suitable rookeries including Rushikulya and for conservation of olive ridley turtles during the breeding phase. Developmental activities near the sea turtle rookery such as that in Rushikulya will pose threats to the nesting beach due to the reduction of the size of beach from erosion. Therefore, proper environmental impact assessments are required for establishing the safety of turtles and their habitat. Development of suitable conservation and management plans for olive ridley turtles from the Orissa coast in India will require continued tagging efforts to identify more thoroughly their demographics. The Rushikulya rookery is definitely a suitable site for undertaking such programmes.

Key findings: Results of the present study show that olive ridleys during the breeding season are not randomly distributed throughout the area, rather they occur in patches. Locating such patches and providing adequate protection for them will definitely reduce fishing related mortality. The reproductive patches off Rushikulya, were formed near Prayagi (northern end of the study area) at the beginning of the nesting season and gradually moved south, congregating off the Rushikulya beach during December and then moved farther south up to the Arjipalli. This change in location may be due to local environmental or behavioural factors. However, none of the patches were observed beyond 5 km offshore or more than 10 km from the nesting beach. Sporadic nesting of turtles at Rushikulya was observed throughout the field observation months from 2008 to 2010. The maximum number of sporadic nests was recorded from Gokurkhuda to Kantiyagada during December 2008 to May 2009. As the nesting beach is backed by Casuarinas plantations, nest predation by jackals, hyenas and feral dogs was evident on this stretch. During the study period, the beach profile was dynamic and underwent rapid changes. This change of beach profile shifted the mass nesting beach 2 km northward from the Gokhurkuda fish-landing centre, formerly the extreme northern end of nesting beach at the rookery. The change in beach profile during the study period could have confounded any specific comparisons of segments of the beach for the nest site fidelity study. Therefore, tag recaptures during the arribada was only considered for nest site fidelity analysis. Although inter-rookery movement of olive ridley turtles in Orissa occurs, this study reveals that a majority of the turtles display fidelity to their original nesting site and return to the same beach year after year.

Potential areas of future research: The immediate need is to monitor the olive ridley sea turtles – both offshore and nesting populations – at the Rushikulya rookery so that the status of their population is known for formulating appropriate conservation for the species.

Publications: Publications out of this project work are under preparation.