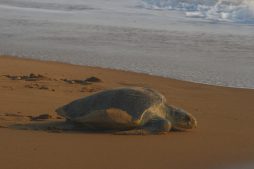 Project title: A Study of the offshore distribution of olive ridley turtles (Lepidochelys olivacea) in the coastal waters of Rushikulya rookery along the Orissa coast

Abstract: The at-sea distribution of olive ridley sea turtles off the coast of the Rushikulya rookery, Orissa, was studied during the 2003-04 turtle-breeding season. Line transects were laid perpendicular to the shore every alternate day, to estimate the surface density of sea turtles. Locations of mating pair assemblages were taken to estimate the extent of the reproductive patches and to identify spatio-temporal changes in the distribution of olive ridley turtles in the offshore waters of Rushikulya. Parameters such as area, water depth, air and sea surface temperature, length and mesh size of the net, duration of netting and turtle entanglement in nets, if any, were taken into account. The estimated surface density of olive ridleys was 35.067 per sq. km (CV 11.22 %) and the encounter rate was 3.68 per km. The reproductive patch was found to be dynamic, with a periodic shifting in the coastal waters off the Rushikulya mass-nesting beach. The area of maximum utilisation for mating pairs was 57.92 sq. km (90% MCP). The mating pairs observed were patchily distributed in the offshore waters at a depth between 16-28 m ( = 26 m ± S.E. 9.9). Maximum sea turtle congregation occurs between 2 and 5 km from the shore. The turtle congregation formed initially at 10 km north off the Rushikulya rookery during November, and then shifted towards the south, at a distance of 3 km off the mass-nesting beach during February. Maximum mating pairs were sighted between 1100 and 1300 hours and at sea surface temperature between 250 and 260 C ( = 24.600 C ± S.E. 1.04). Factors such as time of the day, sea surface temperature and sea states were found to be the limiting factors influencing sea turtle congregation. Long-term offshore population monitoring should be carried out to understand the population trends. Although no impact of traditional fishing on the turtle congregation was documented during the survey, more precise information is required on the sea turtle-fisheries interface.

• To estimate abundance and spatial distribution of olive ridley turtles in the offshore waters of Rushikulya.

• To suggest a suitable conservation strategy for olive ridley sea turtles while they are in the offshore waters off Rushikulya rookery in Orissa.

Key findings: During the breeding season, olive ridley turtles are not randomly distributed throughout the area in the offshore waters of the Rushikulya rookery; rather, they occur in patches. Locating such patches and providing adequate protection for them will definitely reduce fishing related mortality. The ‘reproductive patch’ or the large aggregation of olive ridleys was located just off the arribada beach and extended for a maximum of 5 km from the shore. Although dispersed in an area of ~250 sq. km in offshore waters, most of the mating congregation was confined within ~60 sq km. The coastal waters of Orissa undoubtedly support an enormous sea turtle population, at least near the three rookeries, for a period of six months in a year. Unlike Gahirmatha, the fishing related mortality in the offshore waters of Rushikulya does not appear to be severe. Investigations on the impact of traditional gillnet fishing on olive ridley sea turtle congregations and their mortality should be carried out urgently so as to recommend responsible fishing practices for the artisanal fisherman.

Degree(s) resulting from project: The project was part of the doctoral degree research of the investigator

Potential areas of future research: Since information on the offshore biology and behaviour of the olive ridley is lacking, it is necessary to take up long-term studies on the offshore congregations of olive ridleys in the coastal waters off Rushikulya so that an increase/decrease in the population over many years is known. Future studies should also focus more attention on incidental capture of turtles in various kinds of gillnets, so that responsible turtle-friendly fishing practices can be planned in future.

Publications: The complete report is available on the website of the Wildlife Conservation Society-India Program at http://www.wcsindia.org/projects.html