My first encounter: Ridley hatchlings on their epic journey to the sea! 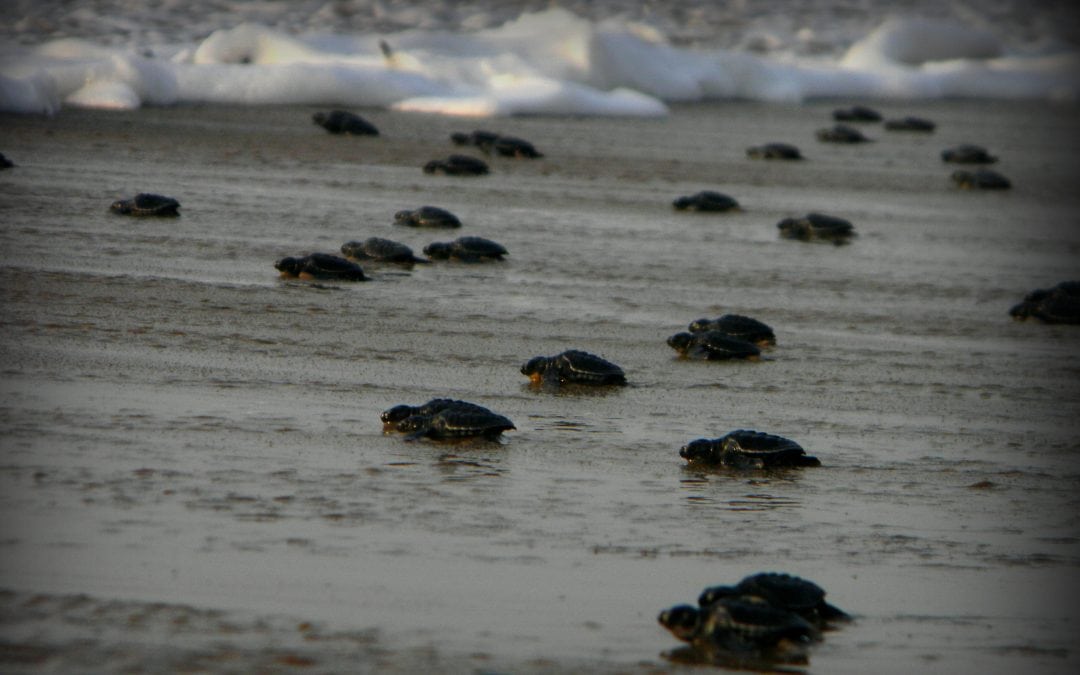 After ceaseless attempts for three successive years, I finally made it just on the day of peak mass hatching this year. In 2010, I left for Rushikulya as soon as I got the news that mass hatching event had started, trying my luck to visualize this epic event in my life. However, luck chose not to be on my side. The day I reached the nesting site turned out to be the last day of the mass hatching event and I hardly got to see anything. I was still gung-ho about encountering my first live hatchling though I have been working on hundreds of dead ones in the lab for more than a year.

When I left from the field station, I knew the wait was going to end soon, just a ride to Gokurkuda village, cross the river in a boat and I would be standing on a beach producing thousands of olive ridley offspring, maintaining the Indian population of ridleys. The walk from Gokurkuda village to the river was less than fifteen minutes. I felt a twitch in my stomach as I heard something moving in the sand. Instantly I knew what it was, flashed light on the moving object and there lay my first hatchling of the season. I could not hold back my urge to pick it up in my hands. I underestimated its power to free itself from my grip as it instantly took a leap, but I let it go. I watched it swiftly move towards the water. As I flashed my light across the river, I was flabbergasted by the number of hatchlings swirling around. With the help of my field assistants, we collected several of them in buckets, pockets, sleeves, scarves and carried them across to release into the sea.

After struggling for 45 minutes to push our boat in the water, the engine roared in the silence of night and we set off to the island. As I stepped on the island, the view of hatchlings swarming around the sand bar staggered me. We spent hours extricating baby ridleys and releasing them towards the sea, letting them walk on their natal beach to ensure imprinting (marine turtles are known to exhibit strong fidelity to natal and foraging areas). Unfortunately, the brighter horizon was landward, disorienting many of the hatchlings. So, we (Sajan, Amrit, Maya and I) played ‘Pied Piper’ to the hatchlings; we spent hours guiding them to the sea using flashlights.

It was 4 in the morning when I saw one hatchling battling against sand while it climbed out of the nest and moved seaward, followed by another and then another. The sand steadily started to whirl in and in no time the hatchlings were swarming out. It was one of those rare glimpses, a clutch of sea turtles hatching during daylight for their mad dash to the sea. Usually the peak hatchling time is during the pre-dawn hours, between 2-3am, to minimize the threat of predation by predators such as crows, eagles, sea gulls, etc. As I gazed till the last hatchling got tossed and turned by the waves and it fought past the breakers, the sun rose on the flawless brimming sea.

I heard a group of chirpy little souls on the island with buckets in their hands, picking up every breathing baby ridley and releasing it into the sea. As I watched them, it gave me a sense of relief and peace of mind that over years we have leastwise influenced the new generation in whose hand lies the future of  ridleys and ours too.

Ema Fatima is a Research Assistant with Madras Crocodile Bank Trust and CES, IISc and works on olive ridleys in Odisha.