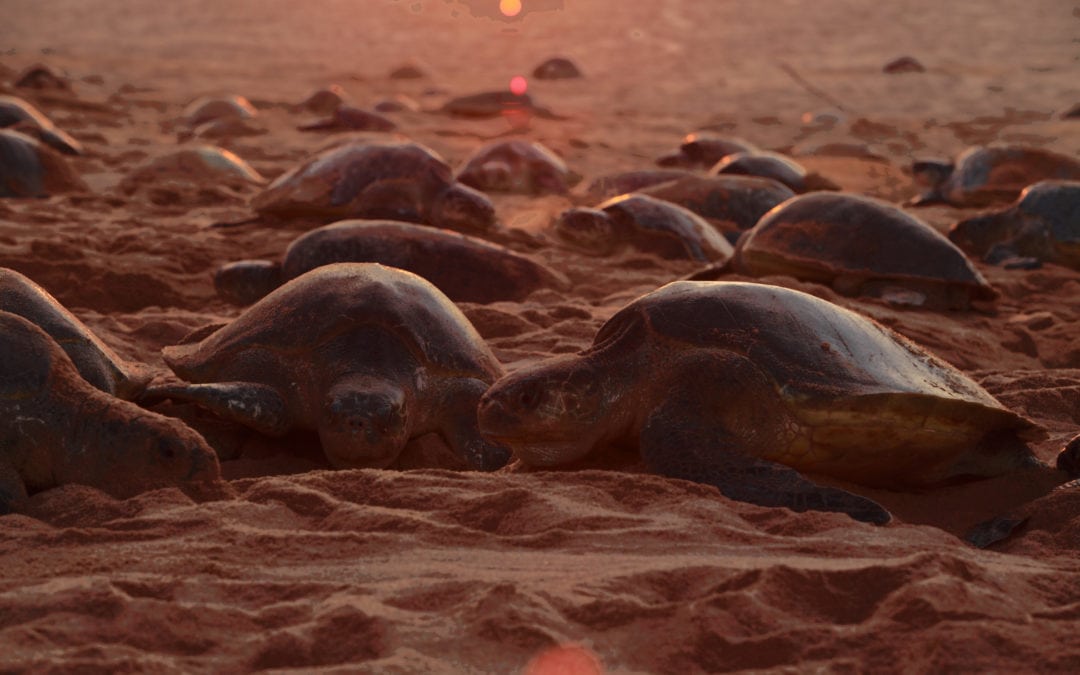 Now you don’t see them, now you do—hundreds of them!!

Prior to my Odisha stint, I had encountered marine turtles nesting on the beautiful beaches of Sri Lanka and a few in hatcheries. Nice big and heavy green turtles (Chelonia mydas) those were. So I had an idea of what to expect in Rushikulya with olive ridleys (Lepidochelys olivacea). Not that ‘olives’ and ‘greens’ are similar- more like rock ridleys to boulder greens. During my first two months of stay in Rushikulya- December 2012 and January 2013, I didn’t see a single turtle. Nothing, nada, zip! I had seen mating pairs during offshore surveys. But it’s not the same as seeing a nesting turtle up close.

Towards the end of January, on the 28th, we were joined by Maya Khosla, a documentary-maker and her friend Joyce. Before heading off to the beach, Maya mentioned that she had been very lucky when it came to seeing a turtle. Her words made me wonder when my luck would come out of the gutters. So the walk started at 9pm. By midnight, still hoping to see at least one ridley doing her deed, we finally saw a turtle come up the beach. Hallelujah!!!! 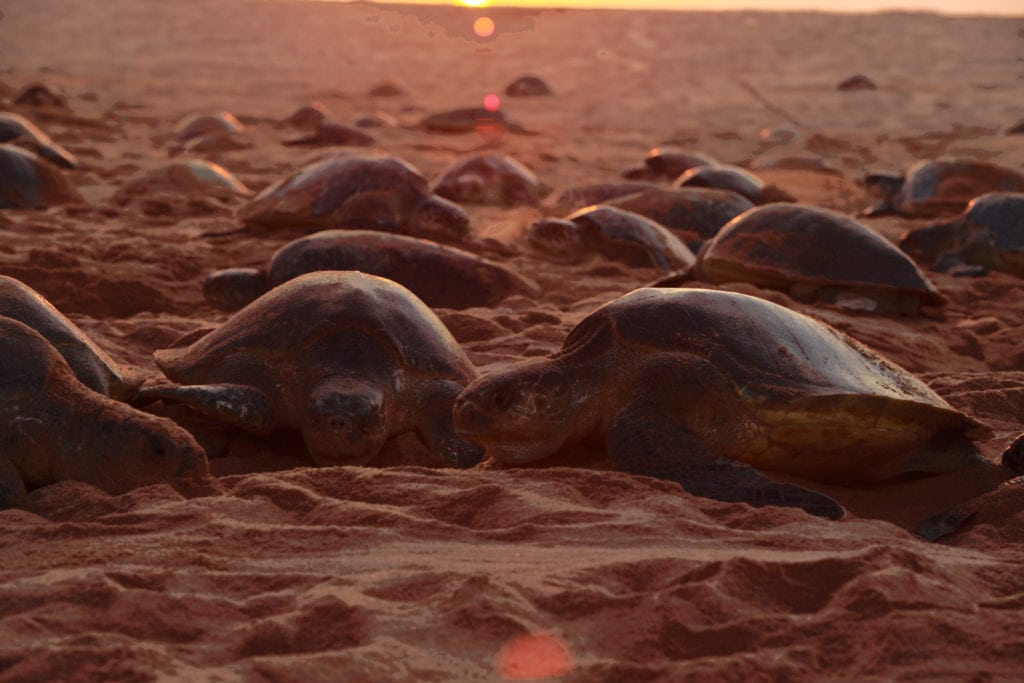 We sat a few feet away from the turtle to see her dig a nest and lay eggs. The whole event took approximately 45 minutes after which we relocated the eggs to a hatchery. I was thrilled to see an olive ridley, and after a while, we saw another glorious mother nesting.

The turtle sightings gave me a boost to stay up all night without a wink of sleep in the hope of catching some more turtles nesting on the beach that starry night. Over the next two weeks, there were few nesting turtles and occasional false crawls (where turtles came up on the beach but did not nest). On 11th February night, there was unusually high activity with 7 turtles nesting and 21 false crawls. This sudden surge baffled everyone. According to local observation over the past few years, mass nesting began when the southerly winds approached. The locals say that the winds bring warmth which is conducive for turtle nests. Also, it erodes the beach making it suitable for the turtles to climb up. But there were no winds from the South, only cool ones from the West.

However, on 13th February at 3:30 am, we saw tons of turtles coming out of the water. Since we were in a part of the beach where the slope was steep, the turtles were unable to climb and we thought that maybe it was just a lot of false crawls. But as we moved to another part of the beach , we realised that mass nesting had indeed started. 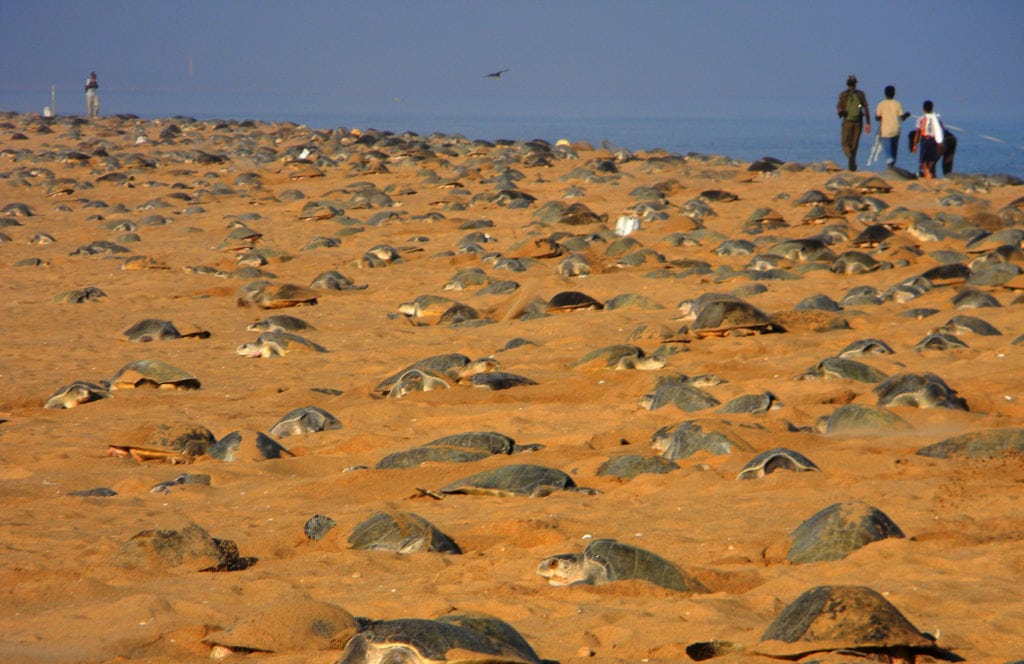 I will be honest- it was scary at first. Turtles coming out of the water like aliens and walking around, paying no heed to my existence. I searched for a nice spot to sit where I could take in the view and not have turtles crawl over me. While the field assistants- Bipro and Mayo- called up the world to announce the start of mass nesting, I observed the tens and hundreds and thousands of turtles walk around determined to lay eggs.

The next few days were a blur. We were joined by few more people for the ‘arribada’ census. The first two days, I was motivated to conduct the counts all through the night. But as the days passed, my excitement diminished. Especially on the third day of mass nesting, when the turtles decided to nest in broad daylight and started coming ashore at 1pm. We had not slept properly or eaten. But if the turtles are on the beach, we should be too. After about 4-5 days, we stopped doing the counts because of unseasonal rains and the number of nesting turtles had also reduced.

Everything said and done, it was a surreal experience. I mean, how often one gets to see such a brilliant natural phenomenon (some of my colleagues would say 4-5 times now). Why all the turtles decide to nest at the same time, in the same place, is still a mystery. But the sheer fact that they do is mind blowing and motivation enough to make us work towards their conservation.

Nupur Kale is a Research Assistant with Dakshin Foundation and Madras Crocodile Bank Trust and works on olive ridleys in Odisha.