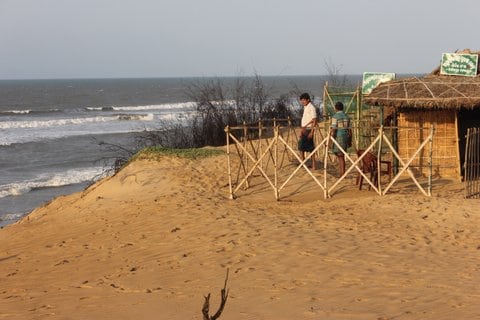 It is a few minutes past 7:00 a.m. on April 24, 2012. After an all-night patrol for sea turtles along Devi Beach, Sovakar Behera walks purposefully through a Casuarina grove, towards the not-too-distant boom of waves. Rita Banerji and I follow him out of the man-made forest, across sunlit dunes that tower over the endless expanses of beaches along Kadua Coast, close to Konark. He ducks his head to step into a small, straw-roofed hut—the only structure for miles.

Posted atop the thatching is a deep green signboard with white writing in Oriya that announces: Temporary Sea Turtle Hatchery, Forest Department, Konark. The inside is sparse and dim. There are two benches, a table and a few notebooks. The only unusual sights in this one-room unit lie on the floor of beaten earth, near the back wall. Two large, shallow tubs are filled with seawater to about 2 centimeters depth. Several hundred olive ridley hatchlings are swimming around inside each tub— some 2000 hatchlings in total.

“We will release them this evening,” announces Bharat Pradhan, a Forest Department laborer.

Behera explains- “When the hatchlings emerge, they can barely move. They have little strength. They need to build it up. This is why they keep the turtles for a few hours in the hatchery,” he indicates the two men who bow their heads in deference to him. 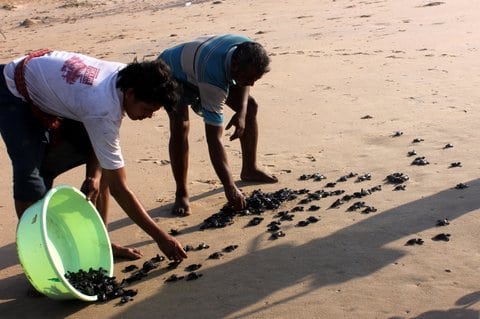 After all, it was initially Behera’s idea. Four years ago, he encouraged Bharat Pradhan and Rotho Pradhan, both Forest Department laborers, to begin scouring the beaches for olive ridley nests. He still supports them on a monthly basis. Behind the hut, the two men have built an enclosure using green fencing supplied by the Orissa Forest Department.

Visiting officials were surprised to hear about the sea turtle eggs being recovered from the area within their jurisdiction.

The beach extends over 20 kilometers from the Devi River to the Kadua River mouth, far more than meets the eye. For years, the sandy stretch has served as a sporadic nesting ground, where Bivash Pandav and others have recorded evidence of predators (jackals, dogs) consuming turtle eggs on beaches close to the Casurina groves. All good reasons to protect sea turtle eggs in a hatchery, isn’t it!?!

Holding a small basin of hatchlings, Bahrat and Rotho lead us down to the blue swells and set their cargo down. The hatchlings crawl to sea like clockwork. Entering the foam, the hatchlings roll, rapidly right themselves and dive. Our cameras click to life. 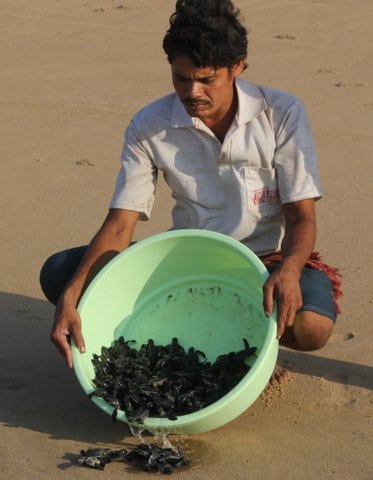 We have spent months documenting sea turtle conservation work along beaches in Gujarat, Little Andaman Island, in Rushikuliya Beach and now along the Kadua Coast, south of Devi River.  We have documented hundreds of hatchlings heading for sea, guided by dedicated hatchery workers.

While many release the newly hatched turtles immediately, many like those in Konark hold them for a few hours until they have “exercised their flippers.”

Kartik Shanker’s document on Sea Turtle Conservation Beach Management and Hatchery Programmes holds a different view. “Release them as soon after emergence as possible,” is the simple advice to all.  The news from Nicholas Pilcher and other sea turtle researchers is even starker, because they experimented with keeping the hatchlings contained for hours before release…The conclusions?

Both in Gujarat and Orissa, we referred to Kartik’s 2003 hatchery manual, printed copies and mailed them out… But a niggling question persists. What if few people get to read the document carefully enough to implement its critical instructions?

And so, following that question, some hopeful ones. Could visuals serve the purpose? Is it possible that explanations-on-film could transcend language and perhaps even galvanize a groundswell of new thinking on hatchling release? That is our hope.

Maya Khosla is an independent writing and editing professional based in New Delhi, India and writes for Turtle Dairies of Save Our Seas Foundation. Documenting sea turtle conservation work is a part of The Turtle Diaries Project, supported by two awards from the SAVE OUR SEAS Foundation. For more information, please visit The Turtle Dairies project.