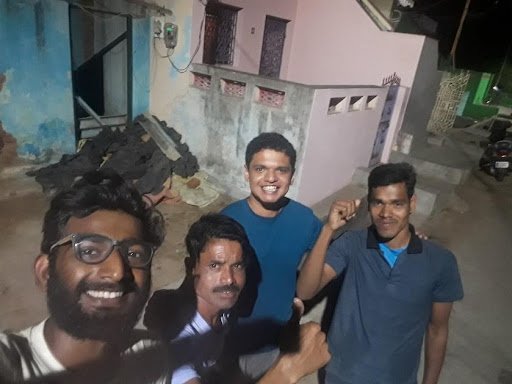 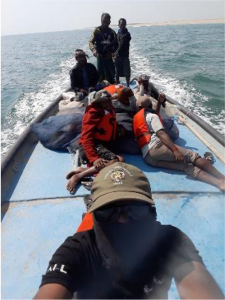 On a chilly night in Chennai, a group of people and I, started our walk from Neelankarai beach with volunteers of SSTCN to look for nesting female olive ridley sea turtles and their nests. During the six-kilometer walk, we didn’t find any trace of females or eggs, and all we saw were washed-up turtle carcasses. I had no clue, at that moment, that these carcasses would become my study subject four years later.

For my Master’s dissertation, I wanted to see if the foraging habits of turtles that nest in the arribada are different from that of turtles nesting solitarily. But after some lengthy discussions with friends and supervisors about the study plan, I realized that it was uncertain if the arribada would happen during my study period. In addition to my bad luck of not seeing any nesting turtles during two years of volunteering in Chennai, and missing the arribada of 2018 by a day, factors such as the cyclone of 2018 and the onset of the El Niño, made it look like the arribada might fail to occur during my study period. With all this in mind, I modified my study to look at the foraging areas of turtles that breed in Chennai and Rushikulya, using stable isotope analysis with the bones collected from dead turtles.

Chennai, being home for three years during my Bachelor’s degree, has always been close to my heart. I also had two advantages– my college friends could accommodate me and I  knew enough Tamil to manage my fieldwork. Since Chennai only has solitary nesting, it can be assumed that all the turtles breeding here are solitary nesters. Other than the turtles, one important thing you can learn in Chennai about walking along urban beaches is to never look back or under your footwear when you feel you have stepped on something unknown! 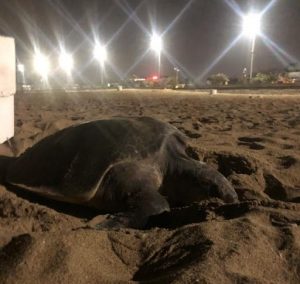 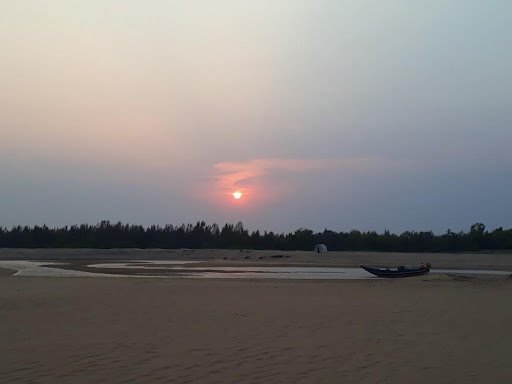 While Chennai was familiar to me, Rushikulya was a completely unfamiliar place. Other than the knowledge gained by reading research papers and popular articles, I had no clue about my second study site. The Odia language was entirely new for me. Additionally, Telugu was the second language being spoken in the fishing villages, and mine was confined to “Naku Telugu radhu”(I don’t know Telugu). My first visit to Rushikulya was a year before my master’s dissertation and just a day before the February 2018 arribada. The visit was during a study tour that lasted for only four hours at night. Rushikulya was special for me as I saw my first nesting sea turtle there. I wanted to visit Rushikulya the next night, but the tour schedule didn’t allow us. The day we were leaving Odisha, we came to know about the beginning of the arribada. As I looked visibly disappointed about missing it, Dr. Gopi suggested that I work in Rushikulya for my dissertation and witness it the next year.  No one knows how, when and where exactly the arribada will take place, and this might explain why turtle researchers often feel frustrated and motivated at the same time. It was the same feeling forcing me to work on this “incorrigible long-lived species” and to study their ecology.

Everything seemed easy when I planned my study. All I had to do was walk on the beach, find dead turtles, take their humerus bones, and collect bone powder for analysis. However, this turned out to be easier said than done. While my batch mates started their work in December, I was still waiting in January for my research permits to be approved by the Forest Department. In the meantime, I focused on the nesting habitat of turtles and helped in field activities on the long-term project of Dakshin Foundation, all the while running to Forest Department offices in Chennai and Bhubaneswar. With the permits in hand, I started looking for dead turtles by January end. 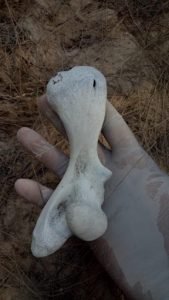 Searching for turtle carcasses in Chennai and Rushikulya were two different tasks altogether. In Rushikulya, it looked as if I had enough dead turtles to collect bones from, but after a week of searching, I got only half the number of carcasses I needed. Many carcasses were buried by the Forest Department and needed to be re-discovered (by us). Mayo and Bipro, the two field assistants, had two different approaches to finding them. Mayo relied on his feet and checked the depth his legs sunk to in the sand, to determine whether a turtle was buried there. In places where turtles were buried, cavities formed by the decomposed carcasses made the area a little softer which Mayo could feel, and we would use probes to confirm if a carcass was there. Bipro looked for the track marks that were left behind when the carcasses were pulled by people. In Chennai, these methods couldn’t be used as the beaches were filled with people and it seemed as though the dogs shared the same interest in looking for humerus bones. I had to walk long distances and look for small patches on the sand with a large number of crab holes which indicated that crabs were feasting on the buried turtles.

While finding a carcass was one task, removing the bone was another awful task, taking 20-30 minutes for each carcass. For turtles that were dead for a longer time, I wasted multiple knives to cut thick dried skin. When I complained about the quality of knives to Babu-Bhaiya, who has a small shop on the highway, people there always wondered what I was cutting and why. For dried carcasses, getting the bones were relatively easy as maggots ate the muscles. For freshly dead turtles, it was the opposite, as the skin was soft, but the muscles were difficult to cut away from the bones. The next task was to clean the bones. The ghastly smell of decaying muscles on bones awaited me after I was done with the collection. To get rid of muscles from my samples, I boiled them in water and removed the tissue. This left me with clean bones and a bucket full of turtle soup. 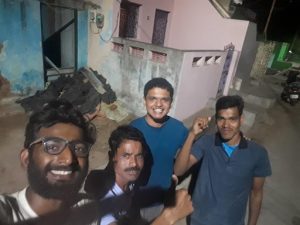 Amidst these stinky activities, most of my leisure time was spent talking to the local staff and listening to their stories of fieldwork dating back to as early as 1999. The most exciting stories were told by Bipro, who was close to turtles from a very young age. Bipro’s father, Dambaru, was the person who first reported the occurrence of the arribada Rushikulya and later worked with almost all the sea turtle projects that took place there. While most of Bipro’s stories were factually correct, one aspect of the stories I learned subsequently was that the year he mentioned was often random. Madhu Ji, who worked with us and cooked our food, was another great person working on sea turtles for a long time. His stories mainly revolved around the fieldwork he did with my supervisors from the Wildlife Institute of India.

The best time spent was roaming around with another field assistant and the hero of Ganjam village, Mayo. It seemed as if the whole town knew Mayo and Mayo knew everyone. He greeted them with a “Right na?”, to which the people responded with “Right”! Mayo was the most cheerful guy and Shankar Ji, my primary field assistant, was the calmest person who worked with us. Always ready 15 minutes before time, Shankar never engaged in long conversations. It was pretty difficult to get him to talk about the old fieldwork that he did with my faculty. He only gave short and to-the-point replies, without any long explanations. Most of the fieldwork with him was a silent job– with him knowing what to do, and me doing what I had to do– and the talking happened only while traveling to and from the field. 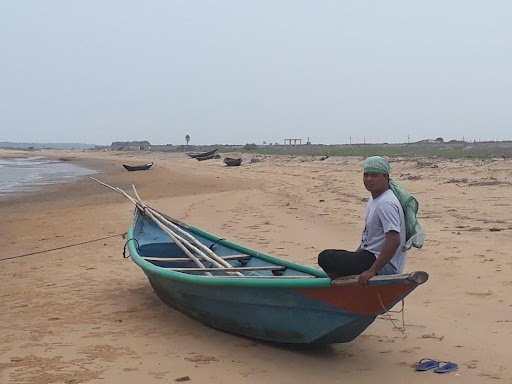 While doing all this, I was eagerly waiting for the arribada to happen, but the turtles didn’t want to cooperate. Some mornings, Bipro would call to inform me that many of the nests were being laid and that I should get ready for the arribada. Often, good nesting did happen the following night which means a couple of hundred nests but not enough for an arribada in Rushikulya. With no signs of the arribada, I left for Bangalore with a bag full of bones and the hope of seeing the arribadas the following year.