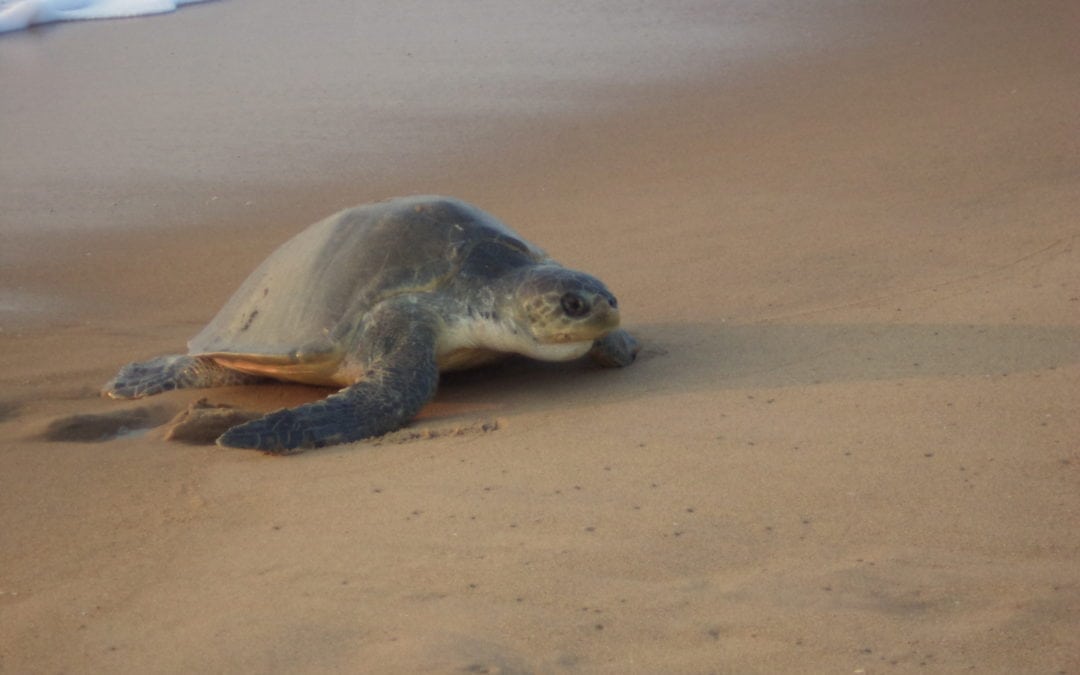 The coast appeared from under the clouds on the horizon rather abruptly. The waves were but thin white lines on the narrow shore. As the plane descended over the Bay of Bengal, the blue ocean began to get a texture. And just as it began landing in Vizag, I could see sprays spontaneously dotting the deep. All this before I had even arrived in Ganjam, Odisha to witness the mass nesting of olive ridley turtles!

Of the seven surviving species of sea turtles, only two – the olive ridley and the Kemp’s ridley – display this behaviour of thousands of adult females laying eggs in very close proximity and simultaneously. Sea turtles come to land only to lay eggs, the hatchlings of which will swim back into the sea. Males never return to land, but females do every few years, just for a night or two, to nest. With the ridleys, at some sites, the females come ashore in large numbers every season in an event called the ‘arribada’ (Spanish for arrival).

As soon as I arrived that night, I dashed off to the beach. The waves were erupting in bioluminescence, courtesy the light producing microbes riding on them. As we walked toward the main beach, turtles were crawling around in dozens and more were emerging from the sea. Many were frantically looking for spots to dig nests; some were lying around as though defeated from the enormous effort of carrying hundreds of eggs inland (for all I know, it was quiet contemplation). The air was filled with a seaweed-y scent.

Nupur and Murali, researchers at Dakshin Foundation, told me what to look out for with the turtles as we walked. The crowd swelled to the extent that we had to dodge turtles as they scurried by or lay buried, at every step. They were certainly not bothered about walking into one another or anything else. Soon, the beach was full of heavy breathing, busy turtles spraying sand around, some beating down their sealed nests. This had to be the largest gathering of animals that I’d ever seen (except perhaps ants) and that wasn’t going to change anytime soon. And yet more kept emerging from the water, shells glistening in the moonlight, their carapaces loaded with bioluminescent microbes while still wet. Running fingers down their back ignited glowing trails – talk about magic.

The nesting females take their own sweet time finding a spot – barging into several others in the process – and digging a flask shaped nest. As often as they abandon a nest halfway, they manage to dig out a nest already made by another. As a result, eggs in various degrees of squish lie around. These are literally the shape, size and firmness of ping-pong balls – they even bounce! The female turtle gets into an inclined position over her nest and commences laying. They often go into a glazed-eyed, still trance, some eventually buried under sand from neighbouring diggers. 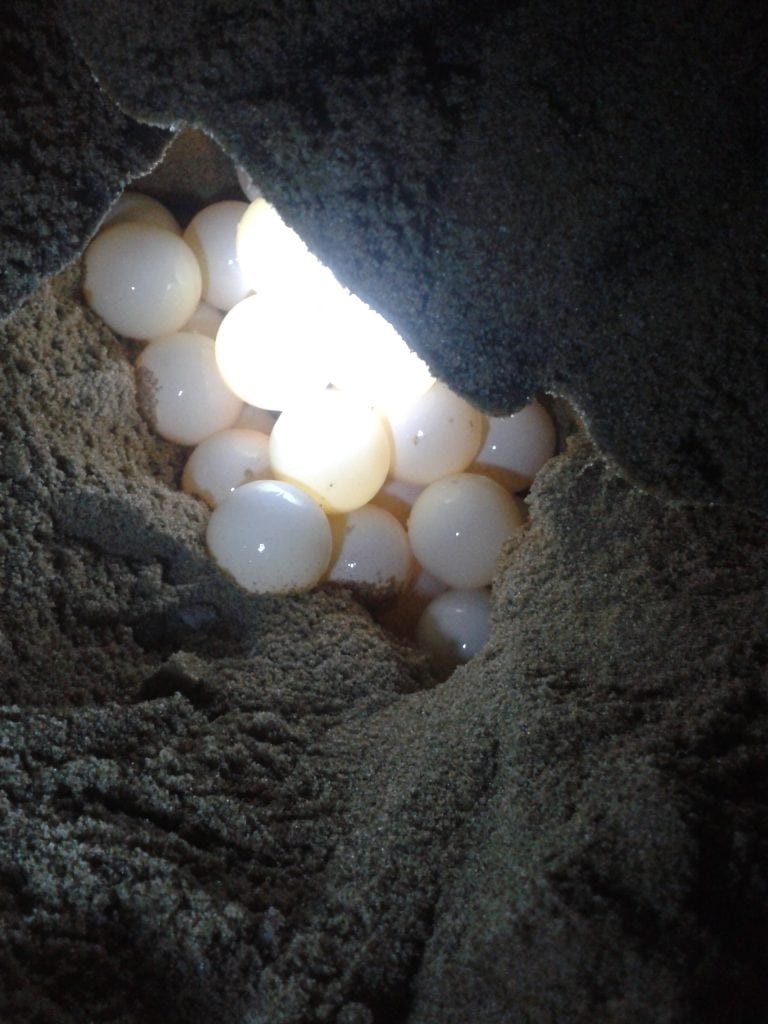 A dozen humans were walking around the beach counting turtles and visually documenting them. Our team was conducting transects in some sectors, counting the number of egg-laying turtles only (not digging, crawling, covering), every hour. Over the next few days, we happily gave up on sound sleep to count turtles all night long. We’d also take shell measurements, and some of us even tracked the egg-laying. It involves making a small window in the nest once the turtle settles in and recording the start and end time, counting every egg as she lays it.

In time, the lady finishes laying the clutch and covers it with sand, tamping it down with a meticulous flipper-waving, chest-thumping ritual. The compacted nest is then covered with loose sand, made to look rather uninteresting, and then the turtles return to the water. Although most of the activity is concentrated in the dark hours, turtles were still coming ashore at dawn.

The hatchlings will likely emerge in about 45 days and swim frantically back into the ocean. Not all eggs hatch, and only a few of the hundreds of hatchlings actually make it to the ocean. Many are preyed upon by birds, crabs, dogs and so on. Why the ridleys choose to nest this way and what triggers the simultaneous congregation has not been entirely deciphered yet. What is certain is that for these creatures, the strength is in sheer numbers that swamp their predators. The survival of the handful is the all a consequence turtle teamwork.

Magnificent is a small word to describe this phenomenon, but I imagine you get my drift.

Mallika S is an Intern with the Madras Crocodile Bank Trust, and works with the Turtle Action Group.