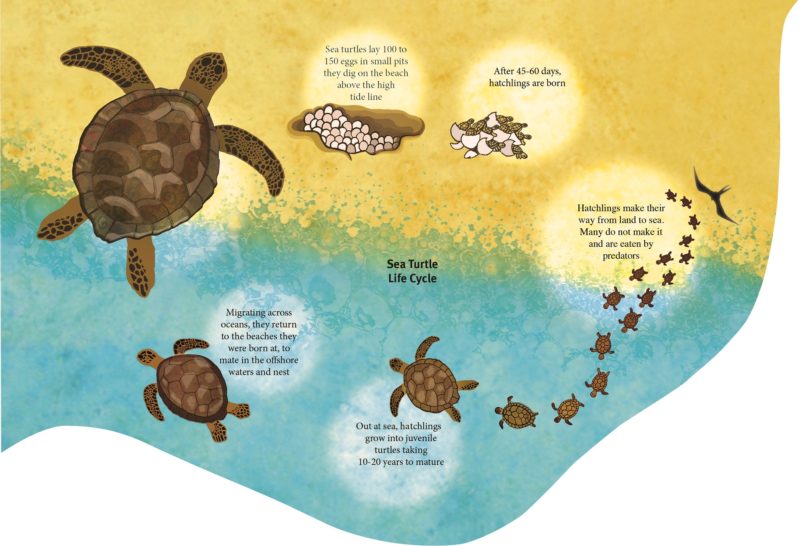 All sea turtles share a similar life cycle although there are variations between species and even between populations of the same species.

Males and females begin the reproductive cycle by migrating from their feeding grounds to breeding grounds which may be separated by several thousand kilometers. Courtship and mating occur primarily in the offshore waters of the breeding ground; the male mounts the female, holding her with claws in his fore flipper and proceeds to mate. Both males and females may mate with several different individuals.

Several weeks after mating, the females come ashore to nest, mostly at night. They crawl above the high tide line, find a suitable nesting site, clear away the surface sand (making a body pit), and dig out a flask shaped nest with their hind flippers. This may be two to three feet deep depending on the size of the turtle. They lay about 100 – 150 eggs in the nest and fill it with sand; some species thump the nest with their body to compact their nest. Once the turtle starts laying eggs, they go into a ‘nesting trance’ and are less easily disturbed during this stage. They then throw sand around the nest for camouflage and return to the sea. Beach selection is affected by accessibility of the beach as well as height and substrate. Different turtles prefer different types of beaches to nest. For example, olive ridleys and leatherbacks prefer wide beaches and sand bars at river mouths, while hawksbills and green turtles prefer small island beaches. Most turtles nest more than once during a season, with roughly two weeks separating each nesting event.

After they have completed nesting, they return to their feeding grounds until the next breeding migration, which may be a year or several years later.

Sea turtles usually travel 100s to 1000s of kilometres from feeding to breeding grounds. It has long been believed that sea turtles return to their natal beach (the beach where they were born) or group of beaches to lay eggs as adults. Recent genetic studies have substantiated this; some species (like green turtles) show greater precision in natal homing than others (like leatherbacks and olive ridleys).
Nest site fidelity: Most turtles lay all their clutches within the same general area (0 to 10 km) during the nesting season. In some cases, such as with olive ridley turtles in Orissa, they may travel larger distances (a few 100 km) for re-nesting. Some leatherbacks have nested on beaches separated by more than 700 km.

Sea turtle eggs are incubated by metabolic heat and the heat of the sun. The incubation time for most species is between 45 and 70 days. The eggs then hatch simultaneously over a period of a few days and hatchlings then emerge from the nest together (to swamp predators) usually at night. Predators include crabs, birds, jackals, feral dogs, and many fish once they are in the sea.

Hatchling emergence is nocturnal to avoid predators and sunlight. Sea finding is visual; the hatchlings seek a “brighter horizon” which is usually the moon or starlight reflecting off the surface of the sea. They also use silhouettes of sand dune and trees to orient themselves away from land and towards the sea. As soon as they enter the sea, they orient themselves to wave direction and start to swim against it. During this time, they also get imprinted on the earth’s geomagnetic field. Hatchlings and adults are sensitive to both magnetic field intensity and magnetic inclination angle, and therefore have a compass sense that enables them to migrate to their natal beaches as adults.

Less than one in a thousand hatchlings is believed to survive to adulthood.

Temperature dependent sex determination: The sex of a hatchling is determined by incubation (nest) temperature. Lower temperatures produce males, higher temperatures produce females. The pivotal temperature (i.e. the temperature that produces equal numbers of males and females) varies among species and populations, but is usually around 28–32°C. The sex of the hatchling is determined during the second trimester of development. Sex ratios are likely to vary over the course of a nesting season and also between nesting beaches. Influences on nest temperature (e.g., rise in temperature from impacts of climate change) can result in skewed sex ratios – more males than females or vice versa – which can lower the potential for reproduction.

Once in the sea, the hatchlings spend the first few days of their lives in a ‘swimming frenzy’ when they use stored energy reserves to get into the open sea. Beyond this, they spend many years in a variety of juvenile habitats until they join other adults at feeding areas.

The Lost Year and Beyond:

Young turtles spend their lives in a variety of foraging habitats. The hatchlings are usually carried on trans-oceanic gyres and currents. Sargassum driftlines (seaweed rafts) and FADs (Fish Aggregating Devices) have been found to be particularly important. Convergence fronts have also been found to be important foraging habitats for juveniles. Loggerheads are known to make trans-Pacific journeys (southern California to Japan) in the course of their development. For very long, this pelagic phase of their life was a complete mystery to biologists and was known as the ‘lost year’. The juveniles and sub adults of some species spend many years in near- shore developmental habitats after the pelagic stage.

Migration habits differ not only among species but also among different populations of the same species. Some sea turtle populations nest and feed in the same general areas; others migrate great distances.