Identification of adult sea turtles from external characteristics is based upon the carapace length, number of prefrontal scales and the number and arrangement of costal scutes. As there are only five species in Indian waters, identification is fairly straightforward when the turtle or carapace can be examined. 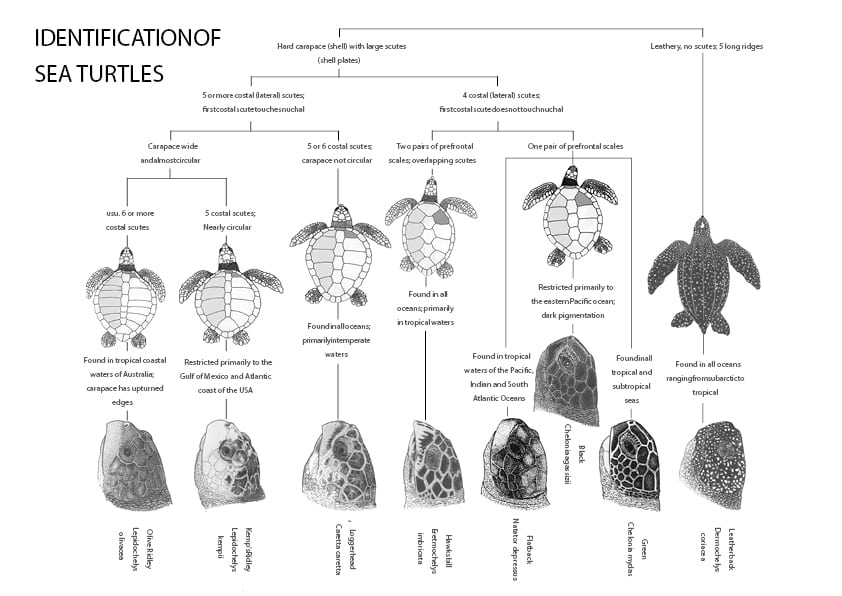 Identification of tracks and nests

The features used to differentiate species based on their tracks include track width, body pit depth and track pattern (symmetrical or asymmetrical). Even though sea turtles can be identified by their tracks, this can be difficult even for experts, particularly with loggerheads, hawksbills and ridleys. Tracks can vary between populations and even between individual animals, and hence it is essential for field personnel to observe nesting turtles and note the characteristics of their tracks. Track identification should be confirmed by checking for remains of hatchlings, egg shell sizes, and other, more concrete evidence.

Hatchlings can be identified using the same characteristics as adults (number of costal scutes, etc) but one needs to be careful since coloration can vary considerably. If the hatching season has started, one must also be alert for hatchling tracks, which are, of course, small, but usually numerous as the hatchlings would have emerged and crawled to the sea simultaneously. One can follow hatchling tracks to a nest, which can be uncovered to examine nest contents and estimate hatching success.