Sri Lanka has a coastline of about 1,585 km consisting of sandy beaches, extensive lagoons, estuaries, mangroves, coastal marshes and dunes. It has jurisdiction over a maritime territory of approximately 488,675 sq. km. This island is located below the southern tip of India, separated from the South Asian mainland by the shallow seas of the Gulf of Mannar. 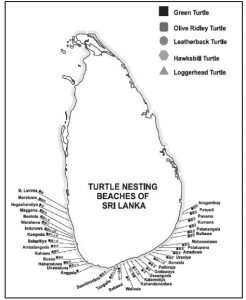 The olive ridley turtle is reported to be the most common marine turtle in Sri Lanka, with regard to both occurrence and nesting. The olive ridleys that nest in the arribadas in Orissa in India use the coastal waters of Sri Lanka as feeding grounds. Green turtles are more common in western and south western parts of the island and commonly nest at beaches in Bentota, Induruwa, Kosgoda and other beaches in these areas.

Sri Lanka and Andaman and Nicobar islands are the only areas in South Asia to have nesting populations of leatherback turtles. They nest mainly on beaches located in the dry zone of the southern coast. The southern coast of Sri Lanka was once so heavily used for nesting by hawksbill turtles that the government licensed stretches of the beaches for exploitation. The nesting populations have now been greatly reduced after heavy exploitation for the tortoiseshell industry. As there are no longer any significant nesting populations in the region, special conservation efforts need to be taken to protect this species.

Sri Lanka does not appear to be a major nesting area for loggerheads, however a few turtles nest on the southern coast and in other areas. However, since this is the only nesting population of loggerheads in the subcontinent, the importance of conserving this population must be emphasised. Although nesting loggerheads are rare, juvenile loggerheads are not uncommon in the coastal waters of Sri Lanka.

Conservation in Sri Lanka has gained considerable momentum in the past decade. Ex situ conservation is carried out in turtle hatcheries initiated by various organisations, hotels and individuals along the southwest and southern coast of Sri Lanka, but such practices seem to favour the tourism industry more than they contribute to conservation of marine turtles. The Turtle Conservation Project (TCP), an independent non-governmental organisation established in 1993 set up Sri Lanka’s first in situ nest protection and research programme in Rekawa in 1996. Under the TCP, surveys, monitoring studies and awareness activities are also carried out.

Ferguson, W. 1871-72. Ceylon reptiles: Being a preliminary catalogue of the reptiles found in, or supposed to be in Ceylon, compiled from various authorities. J. Royal Asiatic Soc. (Ceylon Branch) 5(17): 48.