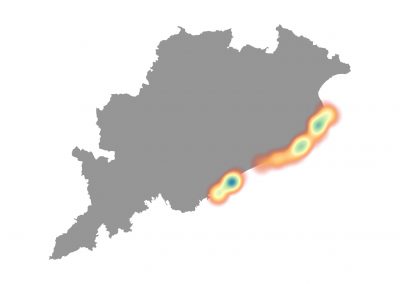 Odisha on the east coast of India has a 480km coastline. Four species of sea turtles have been reported from this area: olive ridley, hawksbill, green and leatherback. Of the four species only olive ridley are reported to be nesting in the region.

In 1990, Bivash Pandav and Chandra Shekhar Kar visited Odisha and engaged with the fisherman in the village of Purnabandha to survey the possible mass nesting site of Rushikulya. They handed over some self-addressed postcards to a fisherman named Dambru Behera and asked him to inform them if he observed any turtle nesting. A month later both Pandav and Kar rushed to Rushikulya to find a significant nesting event. Shortly after this, BC Choudhury and Bivash Pandav from the Wildlife Institute of India initiated a project to tag and monitor turtles in Odisha. Turtles tagged by them are found till today.

Robert Bustard, an FAO consultant discovered the mass nesting of olive ridley turtles in Gahirmatha in 1974 while on a visit to Bhitarkanika on a crocodile survey. The state of Odisha is one amongst the few places in the world that witnesses mass nesting or ‘arribada’ by olive ridley turtles. Since the discovery of this phenomenon, a lot of organizations including the Forest Department have been actively involved in research and conservation of sea turtles in the region.

Chandra Shekhar Kar, one of the recruits on Robert Bustard’s team to survey crocodilians and sea turtles, joined the Forest Department of Odisha in 1976. He discovered the second rookery at Devi River mouth during his PhD, and later a third one with Bivash Panadav in the 1990s at Rushikulya. His study remains a classic comprehensive account of biology of ridleys in India.

Being the only state with three mass nesting sites, Odisha received a lot of attention from organizations across India. Operation Kachhapa launched by Wildlife Protection Society of India marked the beginning of NGO involvement in sea turtle conservation in the state. A large number of organizations got involved to address various types of issues. For example, NGOs such as WWF and Greenpeace worked on enforcing fishing regulations to reduce offshore mortality, while other NGOs like ATREE and Dakshin started the Odisha Marine Resources Conservation Consortium (OMRCC) as a collective to provide a platform to engage both turtle conservationists and fishermen to develop conservation measures together. At the same time several local groups around the region formed local organizations to support the cause. A large number of these organization came together to campaign against the Dhamra port issue.

First records of the rookery in Odisha were reported by Robert Bustard in 1974, where he reports identifying the species based on its skull and subsequently following it up to the breeding season and confirming the mass nesting of the species (Bustard 1976).

In late 1970s and early 1980s more than 50,000 turtles per season were killed and traded for meat in West Bengal (Bobb 1982). Following this news, immediate action was taken by both state and federal agencies and this issue was brought to an end eventually.

Chandra Shekhar Kar, a research scholar with the Forest Department of Odisha, conducted field work for his PhD in Gahirmatha between 1977 and 1982. He tagged over 10,000 nesting females and gathered huge amounts of data on their biology (Kar and Bhaskar 1982).

In the early 1990s, Bivash Pandav of the Wildlife Institute of India discovered the mass nesting beach at Rushikulya, and began his PhD studies on olive ridley turtles. Besides tagging female turtles coming ashore to nest, mating pairs in offshore waters were also tagged. The results of his study showed that incidental turtle mortality had increased substantially due to the change in fishing practices over a period of time (Shanker, Pandav, and Choudhury 2004). This drew the attention of conservationists, leading to the start of Operation Kachhapa.

During his Masters dissertation, Basudev Tripathy of the Wildlife Institute of India found out that 80% of hatchlings were misoriented because of artificial lighting around the Rushikulya beach. This being a matter of major concern, Bivash Pandav, Chandra Shekhar Kar, Jack Frazier and Tripathy discussed alternative ideas for preventing misorientation by setting up a physical barrier at the top of the beach. Around 2009, Karnad et.al conducted a study to assess the potential impacts of coastal lighting at Rushikulya and came up with a model on impact of artificial lighting on hatchling orientation. This study also showed that Casuarina plantations can act as effective light barriers if planted at a certain distance from the high tide line (Karnad et.al 2009).

In 2000, Dr. Kartik Shanker of ATREE and B. C. Choudhury of WII carried out a population genetics study in collaboration with Dr. Ramesh Aggarwal and Dr. Lalji Singh of the Centre for Cellular and Molecular Biology, Hyderabad. Their study of mitochondrial DNA haplotypes suggested that the population of olive ridleys on the east coast is genetically distinct from all the other populations. They also recommended that conservation prioritization for any given species should not be solely based on species designations (Shanker et.al. 2004).

In 2001, Roshni Kutty from Kalpavriksh assessed the community-based tourism in Odisha and reported that turtles had served as a flagship to generate awareness amongst the urban population but had negatively affected the local fishing communities of Odisha (Shanker and Kutty 2005).

The Odisha state government excluded the proposed port area of Dhamra in 1998 from Bhitarkanika sanctuary and Gahirmatha Marine sanctuary. This project was approved in 2006. The Dhamra Port Company Limited (DPCL) invited the IUCN to advise on the potential impact of this port on sea turtles. This port was located in close proximity of important turtle mass nesting sites (~15 km north of Gahirmatha) and, hence, raised some serious concerns amongst the environmental groups. The Dhamra Port Company Limited (DPCL) declared that the project would not be abandoned but they would take the mitigatory measures (Shanker 2008).

In 2007, a long term monitoring project was initiated by Dr. Kartik Shanker through the Indian Institute of Science (IISc) in collaboration with the Odisha Forest Department in order to assess the impact of turtle mortality due to anthropogenic causes. This programme continues to date, in collaboration with Dakshin Foundation, Bangalore, IISc, Bangalore and the Odisha Forest Department, monitoring olive ridley populations at Rushikulya and determining the effects of climate change and other factors on turtle populations.

The Wildlife Institute of India (WII) initiated research at all the three major nesting sites by setting up monitoring camps at Gahirmatha, Devi and Rushikulya. A number of local fishermen were employed in Rushikulya, including Dambru who first notified Pandav about this rookery. After Pandav’s project ended, they went on to assist various other researchers including Basudev Tripathy, Suresh Kumar and other WII projects. Many of them are still involved in the ongoing long-term monitoring programme in Rushikulya.

The Forest Department, Operation Kachhapa, WII and WWF were the most active groups in the Rushikulya area. Several youth from the nearby villages were trained and employed as field assistants by these groups from time to time. One of these field assistants Rabindranath Sahu (Rabi) from Purunabandha village assisted Bivash Pandav during his PhD. Pandav encouraged Sahu and his other assistants to set up an NGO for protection of sea turtles which was called Rushikulya Sea Turtle Protection Committee (RSTPC), officially registered in 2003.

RSTPC was set up in the camp started by Pandav in the mid-1990s. When Basudev Tripathy started his PhD research in Rushikulya, he employed some members of RSTPC and also helped Rabi raise funds for RSTPC. These funds were used to build an interpretation centre and generate awareness material for sea turtle conservation.

Members of RSTPC carried out various activities like beach cleaning, beach profiling, protecting nests and monitoring turtles. They have been involved in awareness generation for school children and local communities. Currently, some of them are employed by researchers, while others get employed by the Forest Department during the nesting season or work as local guides for tourists. They actively monitor nesting turtles for tags installed during Pandav’s project and keep a record of it.

Artificial lighting in the Rushikulya region misorients the hatchlings. RSTPC along with the Forest Department started collecting these hatchlings in buckets and releasing them in the sea. Dambru Behera came up with an idea of lining a net along the back of the beach to prevent hatchlings from moving landward, this worked as a significant conservation measure.

United Artists Association (UAA), formed in 1965, was a group of youths attempting to work with grass-root level organizations and working at capacity building in a range of areas including health and environment. UAA, headed by Mangaraj Panda, has helped administer local conservation groups and fishing communities under the OMRCC initiative. They were involved in forming a federation called Samudram, which aimed at empowering traditional marine fisherwomen. This initiative mainly operates in Ganjam and Puri districts.

Sovakar Behera (Tuku), employed by Pandav to help monitor the Devi River Mouth rookery, formed an organization called Green Life Rural Association (GLRA) in 1993, which monitored the Devi, Chilika and Paradip areas recording both nesting and mortality. They used song and dance to communicate the importance of sea turtles to the communities and school children. Apart from sea turtle conservation they have also been involved in artificial reef setup near Chilika and controlling stray dog populations.

The Gahirmatha rookery lies at the northern-most range of mass nesting beaches and is practically inaccessible without Forest Department permits. It was relatively distant from human settlements. Bijaya Kabi started Action for protection of Wild Animals (APOWA) in 1999 with a goal to achieve community support for welfare of animals. They started working on nest protection, beach cleanup, education and awareness of the communities in the buffer zone of Gahirmatha Wildlife Sanctuary.

Returning to the ocean

Key figures in turtle conservation and research in Odisha

Action for Protection of Wild Animals

Shanker, K. 2008. My way or the highway!!! Where corporations and conservationists meet, Indian Ocean Turtle Newsletter, 8, 10-13