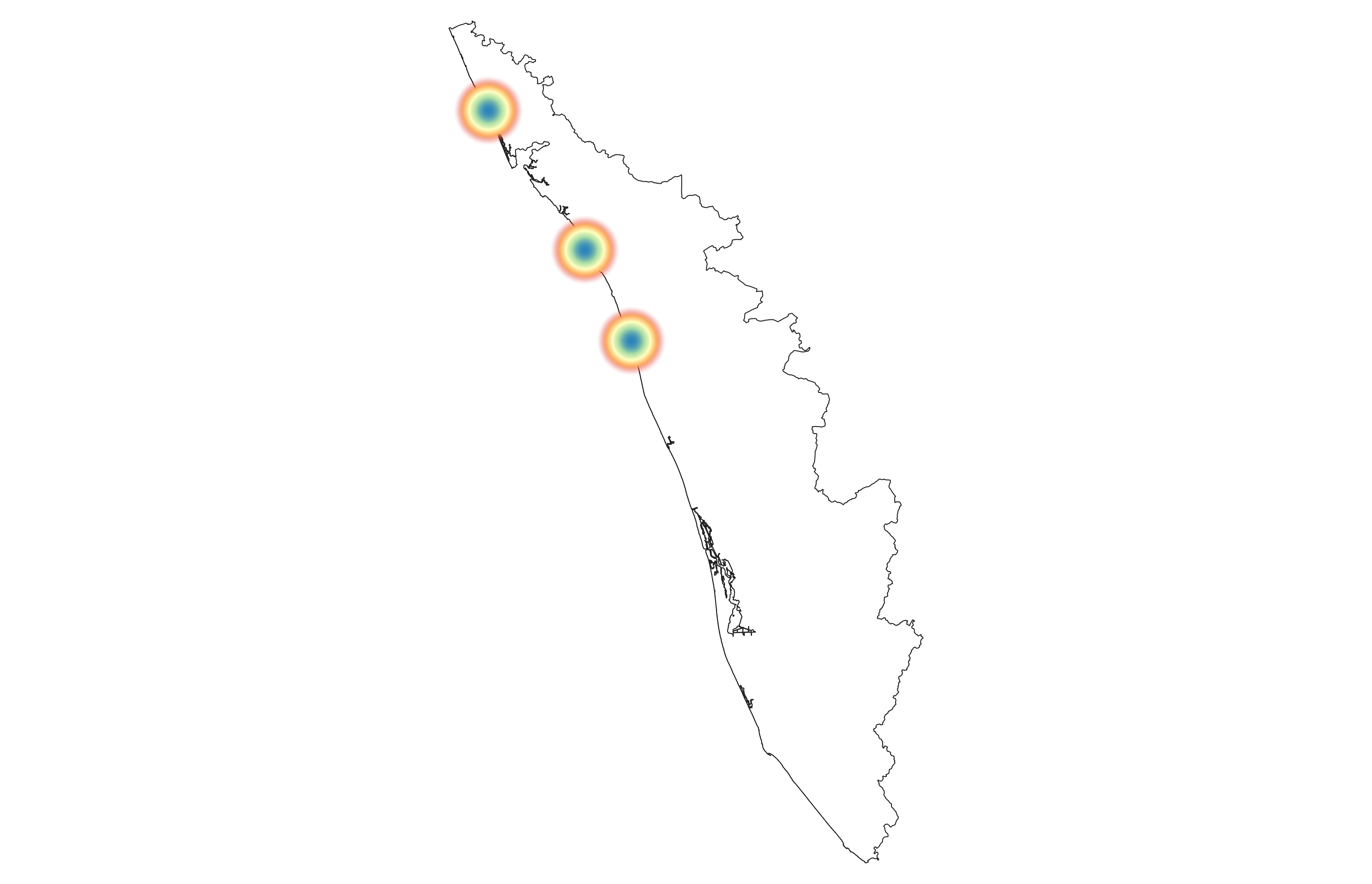 Kerala has a coastline interspersed by rocks, inlets, backwaters and seawalls extending to a total of 590km. Olive ridley turtles are seen nesting regularly, while there have been records of green turtles on the southern coast of Quilon (Shanmughasundaram 1968). Leatherback turtle strandings have been reported periodically but they do not nest in the area.

The members of the Theeram committee – a group of local fishermen that came together after reading an article in “The Hindu”, kept a note of the turtles regularly observed.  Among them was a female turtle with a damaged flipper who nested in the same spot (Jayakumar 2000). The fisherman kept a check on her eggs and, as they were unaware of the basic biology of sea turtles, they assumed that the time taken for hatching of the eggs would be similar to a poultry egg – 32 days. However, they learnt that that was not the case when they dug out the eggs only to find them unhatched. They then observed and checked the development of the eggs every week till the hatching day.

In the 1920s, T.H. Cameron, the DSP of Quilon, was interested in collecting specimens of marine species and made enormous efforts to obtain a leatherback specimen. This was how he got to document that, by 1915, the numbers were declining and approximately 40 leatherbacks were caught annually at the turn of the century.

During Satish Bhaskar’s survey of the Kerala coast in the early 1980s, he found that the coast was lined by a seawall and was unsuitable for turtle nesting. He also noted that turtles and eggs were both consumed regularly on the southern coast. Leatherback turtle meat was consumed in southern Kerala but there was no evidence of turtle fishery. Leatherback strandings were reported from Vizhinjam but there were no reports of nesting leatherbacks.

Turtles are perceived differently in North and South Kerala. In North Kerala, eggs are taken but the turtle is not killed, while in South Kerala both flesh and eggs are consumed. Consumption of turtle meat is believed to be influenced by the fisher folk who migrated from the Kolachal region of Kaniyakumari (Bhupathy 2007).

In recent years, due to interest in turtle conservation, a lot of local organizations have been spreading awareness about the importance of sea turtles. A group of young fishermen came together and started a conservation programme and organization named Theeram Prakriti Samrakshana Samiti.

Satish Bhaskar, in 1980, did a survey along the coast of Kerala to see if the beaches were favourable for sea turtle nesting and submitted a short report for the World Wide Fund (WWF) in 1981. He mentioned that the beach was not favourable for nesting due to human disturbance, fencing by granite blocks and embankments, and mining of titanium by the Indian Rare Earth (IRE) (Bhaskar 1981).

In a series of reports in Marine Fisheries Information Service (MFIS) and Indian Ocean Turtle Newsletter (IOTN), S. Krishna Pillai from the Central Marine Fisheries Research Institute (CMFRI) documents consumption of turtle meat at Vizhinjam. Between 1998 and 2001, S. Krishna Pillai, K.K. Suresh and P. Kannan from CMFRI examined the size composition of incidentally caught turtles in gill nets, hooks and lines, and boat seines in the Vizhinjam area (Pillai, Suresh and Kannan 2003). During this period, 1,216 olive ridleys, 56 green turtles, 43 hawksbills and 5 leatherback turtles were captured and recorded.  Alongside, Jayakumar and Dileepkumar carried out a survey as part of the Government of India-United Nations Development Programme project in 2000-2001, and documented some nesting sites along the coast, mostly near river mouths. They also reported that Christian communities throughout the coast consumed turtle meat, particularly in southern Kerala. Meat consumption was also said to be linked to migrant fishing communities from southern Tamil Nadu. Muslim communities in northern Kerala generally did not consume turtle meat. They suggested that community institutions such as the sea court, which is generally responsible for conflict resolutions, had helped uphold traditions such as the protection of sea turtles and whales.

In 2004, M.J. Palot and C. Radhakrishnan of the Zoological Society of India published the results of a turtle survey in the Malabar Coast of northern Kerala in the Records of the Zoological Survey of India. While the survey largely focussed on terrestrial and freshwater species, they also provide a map of 24 nesting sites of olive ridleys near Kannur, Kasargode and Kozhikode (Calicut) (Palot and Radhakrishnan 2004). Krishna Pillai reported the nesting of olive ridleys at beaches near Vizhinjam, and the incidental catch of ridleys, green and hawksbill turtles.

S. Bhupathy conducted surveys to monitor turtles along the Kerala and Tamil Nadu coasts in 2007. He interviewed fishers who informed him about the nesting from the months of September to November, October being the peak month. This information was supported by the local NGOs monitoring turtles in the region (Bhupathy 2007).

In the year 1996, Jayakumar briefly led an organization called Marine Turtle Conservation Action, whose objective was to conduct surveys and promote community conservation. One of the groups they interacted with was soon to become well known for sea turtle conservation in the state. This was a group of young fishermen in North Kerala, led by Surendra Babu, who formed the Theeram Prakriti Samrakshana Samiti (Coastal Ecosystem Protection Committee) in 1992 in Kolavipalam, Kerala. When these fishermen realised that the marine turtles which nested on their beach and the eggs that were consumed locally were the same species, they formed a group for the protection of these turtles.

During the nesting season, the group members monitored the beach each night for nesting turtles. The eggs of all nests that were encountered were relocated to a hatchery, a small fenced area on the beach, to provide protection from stray dogs and jackals and also to mitigate poaching of eggs. Before the involvement of the Forest Department, funds for paying a watchman to guard the hatchery were generated by donations in cash from within the group and the community.

Starting with twelve members and their own funds, the group finally received support from the Divisional Forest Officer (DFO) of the state Forest Department in 1997, Ms. Prakriti Srivasatava, who encouraged the local youth to keep watch over the beach through payment of daily wages to some of the members during the nesting season from October to March. The members pooled their wages and used it to fund Theeram’s conservation activities. On one occasion, Theeram members tried to rescue and rehabilitate a badly injured turtle. In this case, it was the womenfolk from the community who nursed the turtle. Though the animal did not survive, it attracted public attention and helped spread the conservation message.

To engage students from both within and outside the village, Theeram members used the attraction of turtles to create interest in the younger generation, and motivate them to participate in the mangrove reforestation programmes that were carried out with the help of the Forest Department. Media publicity about Theeram’s protection efforts helped spread awareness among the neighbouring coastal villages. Fishermen from as far as Thikkodi, twelve kilometres to the south, called Theeram members to inform them about any nests or sometimes even brought turtle eggs to Kolavipalam for relocation and protection. Theeram members encouraged these fishermen to protect the nests in situ and advised them on protection measures. Where in situ protection was not possible, the eggs were relocated to the Theeram hatchery. A film ‘Aamakaar – The Turtle People” was made to document their history and efforts.

Naythal in Kasargod on the North Kerala coast, was formed in 2001 by a team of youth at Thaikadappuram village to address environmental problems, in particular coastal conservation. Naythal also initiated a hatchery programme in 2002 – 2003, after seeing the success of Theeram. They covered a 15 km stretch of beach in Kasaragod District, and collected between 12 and 26 nests from 2002 to 2007, releasing about 8000 hatchlings. Naythal has also been involved with campaigns against solid waste deposits, encroachment of Nileshwaram River and the aerial spraying of Endosulfan. Naythal received the P.V. Thampi Memorial Environmental Award in 2004 for their work on sea turtles.

Green Habitat, formed in 2002, branched off from an organisation called Habitat, which was originally formed by a group of high school science teachers in Guruvayoor. Working on environmental conservation in Chavakkad district, this group carried out projects on mangroves, birds and sea turtles. The turtle conservation programme was run primarily in collaboration with Seethi Sahib V.H.S. School in Edakkazhiyur whose National Green Corps members served as their main volunteers. Most of these members were from the local fishing community. In 2010, Green Habitat started the Kadalamakale Samrashikkuka (or “Save the sea turtles”) programme. The group works closely with schools, clubs and local government bodies. They aimed to establish a hatchery and a turtle exhibition centre and make the beaches of the district ‘turtle friendly’.

Key figures in turtle conservation and research in Kerala