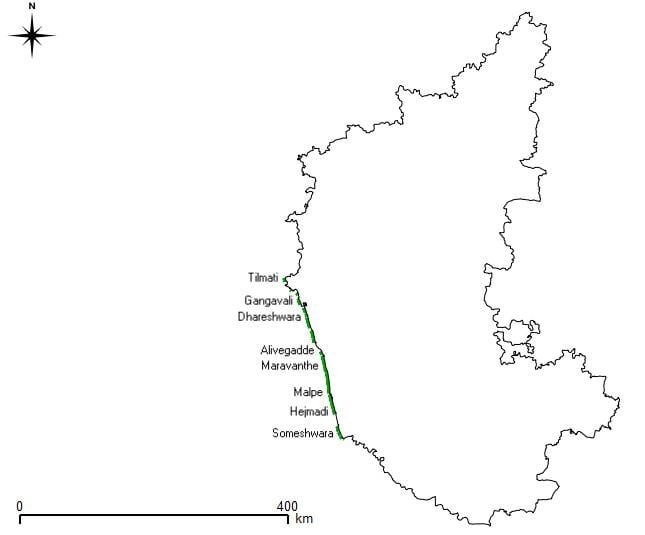 Karnataka, with a relatively small coastline of 260km, has just one species of sea turtle visiting its beaches to nest- the olive ridley. There are occasional reports of green, hawksbill and leatherback turtles in the offshore waters, sometimes in fisheries bycatch. Olive ridleys nest at about 40 sites throughout the coast. Although the density of nests is low and disturbance along the coast is high, the undisturbed sites where nesting occurs are considered significant (Sharath, 2002).

The beaches of Karnataka are mostly rocky, interspersed with a few sandy beaches. The coast of Karnataka is divided into 3 districts: Dakshin Kannada, Udupi, and Uttara Kannada. The coastline is dotted with many fishing villages with minor ports to facilitate trade. As a result, a considerable part of the coastline is quite disturbed and not suitable for turtles to nest (Sharath, 2006).

Owing to cultural and religious value, most fishing communities here do not consume turtle meat but do consume turtle eggs. During extraction, a few eggs are left behind in the nest to ensure continuity of the population. The local fishers consider it bad luck to see emerging hatchlings when they leave for fishing in the morning and believe that their catch will not be good (Sharath, 2002). With such prevalent beliefs, bringing about change has required constant effort at building an understanding about the importance of conservation. It has been recognised that laws will only be effective if the local community members are voluntarily onboard.

Two studies conducted to survey the coast for sea turtles, separated by nearly two decades, show that nesting densities have drastically reduced whereas egg-sales have increased, since the 1980s. Despite laws prohibiting the take of these turtle eggs, clandestine sea turtle egg trade is believed to continue.

Gulabi Tandel, a member of the Gangavalli village in Karnataka approached the turtles that were reaching the tidal area, put her hand on their carapaces and said, ‘Both of you take care’. Gulabi Tandel and her family had looked after turtles rescued by Canara Green Academy, an NGO based in Honnavar, Karnataka. This statement reflects a change in the mindset of the local community members of coastal Karnataka that has come about over the decades due to the effort of many NGOs in spreading awareness about sea turtle conservation.

In the last two decades, there have just been a handful of studies to survey the sea turtle populations in Karnataka. Since the 1980s, information gathered through research on sea turtles in Karnataka has been sparse.

In 1982, Kar and Bhaskar established that the only species of sea turtles that came to nest on the Karnataka coast was the olive ridley. B. K. Sharath surveyed the Karnataka coast, between Mangalore and Mukka, from October 1984 to March 1985, to look at the nesting frequency of olive ridleys. He also did a market survey and recorded turtle egg sales, thus, confirming their consumption in the area.

In 1984, the Central Marine Fisheries Research Institute (CMFRI) organised a workshop with the focus on sea turtle conservation. Satish Bhaskar, often called the ‘Turtle Man of India’, attended the workshop and realised he had little knowledge of turtles on the Karnataka coast. Consequently, very little conservation of any sorts was happening. The Assistant Conservator of Forests, Karwar was present at the meeting and committed to developing a sea turtle conservation programme (Kar and Bhaskar, 1982).

In 1987, on the invitation of the Chief Wildlife Warden, Jack Frazier of the Smithsonian Institute visited the Karnataka coast and surveyed 3 hatcheries that were functional for an evaluation. These were initiated in 1984 (perhaps in response to the information that had filtered back from the CMFRI workshop that year). This was followed by a number of recommendations for better management.

Besides harvesting of eggs and coastal development, Rajagopalan et al. in 1996 found that fishing-related mortality was still prevalent on the Karnataka coast, based on the olive ridley and hawksbill carapaces found. Although not a major threat, it had the potential of decimating the population if unchecked.

In 2002, as a part of the GOI – UNDP project – a sea turtle status survey along the coast of Karnataka was done by Dr. B. K. Sharath. It was found that average number of eggs sold per sale point went up from 774 in 1985 to 952 in 2001. In 1985, the nesting density was 0.75 nests per km which showed a dramatic decline to 0.25 nests per km in 2001. This decline is chiefly attributed to egg poaching followed by modification of the coastline.

Annie Kurian carried out work on the influence of environmental factors such as temperature, moisture and sand characters on the hatching success of olive ridleys for her PhD thesis from the Karwar University.

Although nesting intensity of the olive ridley sea turtle is relatively low in Karnataka compared to many other parts of the Indian coast, a few NGOs have cropped up to mitigate the rising threats to these turtles. The focus of these NGOs has been to get the local community on board as they believe that is the only way to ensure sustainability of conservation activities.

Field Services and Learning (FSL), started in 2000 and was established in Kundapura to provide an opportunity to foreign youth to participate and volunteer in sea turtle conservation, amongst many other programmes. The volunteers work in direct coordination with the local community members. Their focus is on increasing awareness and encouraging the local community to play a more active role in protecting their environment. They dissuade poaching of eggs by offering 3 times the market price as compensation.

Canara Green Academy (CGA) was founded in 2005 with the mission of conserving the flora and fauna of the North Kanara district. In December 2006, they organised a workshop that brought together Forest Department officials, scholars and teachers from different colleges of North Kanara District, representatives from many research institutes and other NGOs and helped start off their turtle conservation programme in earnest. Their activities dealt with threats like nest predation and poaching of eggs. They intensively carried out awareness programmes for the local communities and offered them incentives to increase their participation in conservation.

In spite of the activities of these NGOs, the population of sea turtles in Karnataka is declining. In the last 2 decades, it has drastically gone down on account of increased coastal development and intensive harvesting. The construction of sea walls, as a mitigatory measure against beach erosion, has only served to reduce the area available for nesting. Of the 260km coastline of Karnataka, a study has shown that only about 12km is suitable for nesting of turtles (Sharath, 2002).

Key figures in turtle conservation and research in Karnataka

Shanker K. 2016. From Soup to Superstar: The Story of Sea Turtle Conservation along the Indian Coast. HarperLitmus.

Sharath, B. K. (2002). Status survey of sea turtles along the Karnataka coast, India. A Government of India/UNDP project report. Karnataka, Department of Biosciences, University of Mysore.

Kurian, A. & V.N. Nayak. 2003. Influence of environmental factors on the hatching success of olive ridley turtles- A preliminary study. Kachhapa 8 8-11