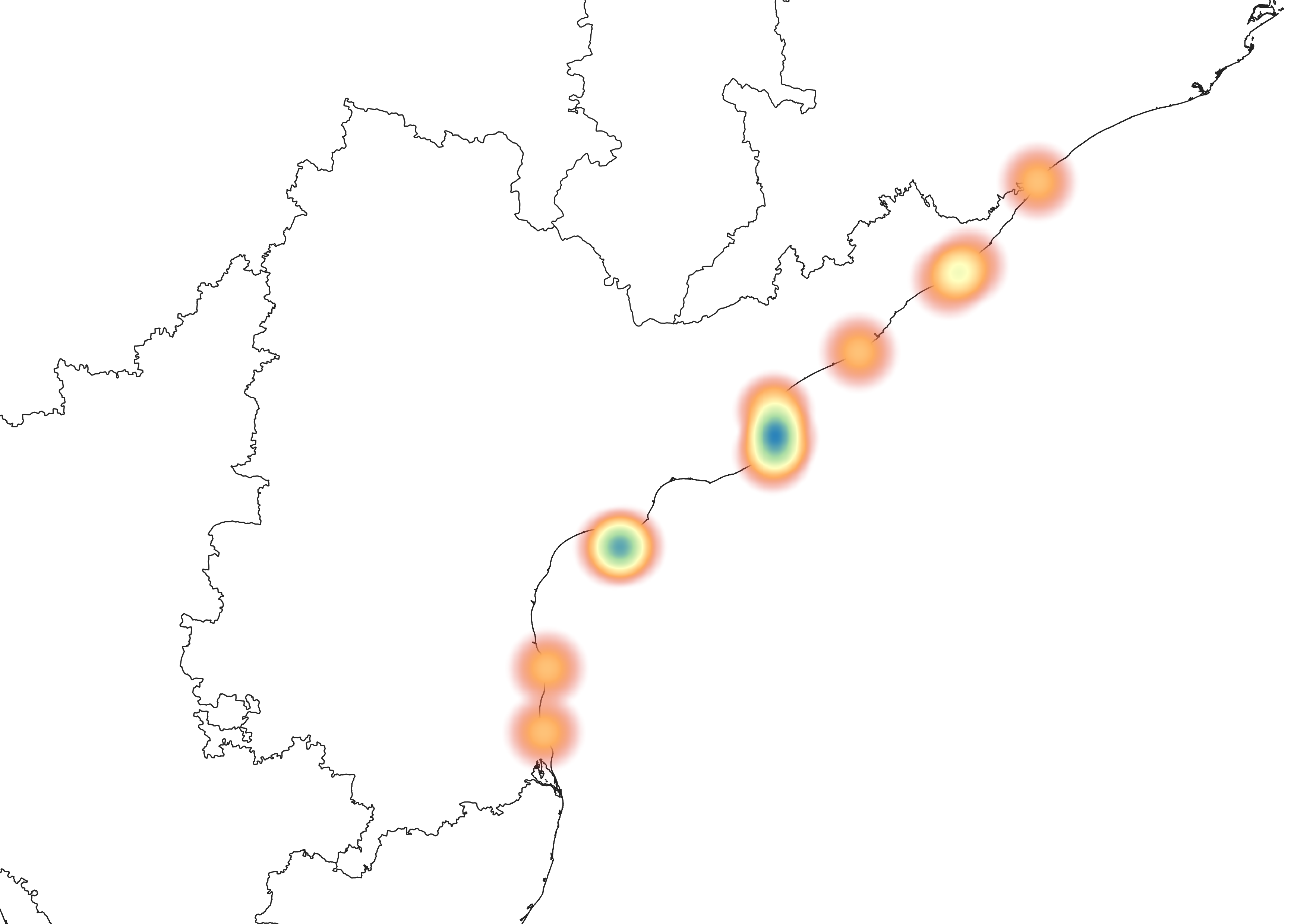 The Andhra coast ranges from Bahuda on the southern coast of Odisha to Pulicat Estuary at the Tamil Nadu border covering about 1000 km. Four species of sea turtles – leatherback, hawksbill, green and olive ridley turtles – have been reported from Andhra Pradesh. Amongst these, only olive ridley turtles nest on this coast and are affected by the problems of urbanisation, sand-mining and predation of eggs and hatchlings.

Sea turtles are worshipped in the state of Andhra Pradesh as elsewhere along the coast of India. However, ‘Srikurmam’ (kurma meaning turtle in Sanskrit) at Srikakulam is the only temple of its kind in the world dedicated to ‘kurmanaswamy’, the turtle incarnation of Lord Vishnu. A community of fishers from the Agnikula Kshatriya caste near the east Godavari region describe themselves as belonging to the ‘kurma kulam’ caste.

Satish Bhaskar surveyed the Andhra coast in 1982 to find out if turtles nested in densities similar to Odisha in the northern Andhra region. On his surveys, he did not see any evidence of mass nesting but noticed that, like Odisha, adult turtles caught at sea were shipped to West Bengal for trade. There was a fair amount of consumption of turtle eggs all across the coast.

Vishakhapatnam, where the headquarters of the Eastern Naval Command of the Indian Navy is located, has been a centre for conservation action in Andhra Pradesh. Vishakhapatnam Society for the Prevention of Cruelty to Animals (VSPCA), has been involved with the protection of the nesting beaches in Vishakhapatnam and at other sites in northern Andhra Pradesh. Historically, most conservations efforts have been concentrated in the northern coast; however, in recent years, organizations such as TREE Foundation from Tamil Nadu have been working on the southern coast.

The earliest record of turtles from Andhra Pradesh is by Prof. S. Dutt, Head of the Department of Marine Sciences, Andhra University at Vishakhapatnam about the capture of turtles every day in the winter of 1978-79. He suggested that turtles being caught before they came ashore to nest could explain why there were few records of nesting from the region (Dutt 1979).

When the arribada did not occur in Gahirmatha in 1982, Satish Bhaskar decided to explore the northern Andhra coast. He covered a distance of about 225 km and counted about 444 olive ridley nests, but found no evidence of an arribada even in the northern parts of Andhra, about 50 km from Rushikulya where mass nesting was discovered a decade later. On this survey, he also found a hawksbill hatchling in a shore seine net and learnt that juvenile hawksbills were frequently stranded on the coast of Odisha, Andhra and Tamil Nadu, but there was no evidence of nesting (Bhaskar 1982).

Between 1983 and 1987, PS Raja Sekhar of Andhra University conducted a comprehensive survey of the entire Andhra coast as a part of his doctoral research. He documented about 800 nests across the coast, most of which were depredated by humans and animals. He documented the capture of turtles during courtship and mating from 1984-87 on the northern Andhra coast and also enumerated dead turtles on the coast (Raja Sekhar 1983). He conducted similar surveys in the mid-1990s and found that the turtle trade had either reduced or stopped, but turtles continued to wash ashore in large numbers.

In 1983, RJ Rao of the National Chambal Sanctuary, working on freshwater turtles, reported nesting from Hope Island near Kakinada. He reported depredation of eggs and consumption of turtle meat in the region. He recommended that the Hope island area be included in Coringa Wildlife Sanctuary for saltwater crocodiles (Rao 1983).

S. Biswas from the Zoological Society of India reported the occurrence of sea turtles in Lawson Bay at Waltair, an important fish landing centre on the Andhra coast. He noted that the seabed in that region had pastures of seagrass and algae on the rocky substrate. Olive ridleys were most common, but green and hawksbill turtles were also frequently encountered (Biswas 1982).

In 1998, KVR Priyadarshini of the Worldwide Fund for Nature’s Conservation Corps Volunteer Fellowship Programme conducted surveys of the northern Andhra coast and documented a high intensity of nesting at Kopaskudd and Sacramento Island. Her surveys suggested that only freshly laid turtle eggs were consumed and there was no market for egg trade. Calipee, a fatty gelatinous substance found over the lower shell of a turtle, was removed from freshly caught turtles and consumed for its purported medicinal value (Priyadarshini 1998). During this project, the Andhra Forest Department initiated conservation of sea turtles at this site along with the involvement of local members to monitor the beach.

In 1999, VSPCA conducted a survey of the Andhra coast where they located about 400 nests across 100 km of the coast. They documented high levels of adult mortality and depredation. Later, in 2000-2001, Basudev Tripathy carried out a systematic survey of the Andhra coast as a part of the Government of India-UNDP initiative. He estimated the laying of about 10,000 nests on the entire Andhra coast. The density of turtle nesting was significantly higher near the major river mouths compared to other regions on the coast. Tripathy also observed depredation of nests. Some fishermen in Kalingapatnam in northern Andhra reported a significant intensity of nesting between Vamsadhara and Nagavlai river mouths that peaked during the Sivaratri mela, a festival in February or March (Tripathy and Choudhury 2001). During these surveys, Tripathy also documented significant nesting in Sacramento shoal beach during January/February.

The Indian Space Research Organisation (ISRO) funded a six-year faunal diversity survey in 2003 as a part of which scientists from Bombay Natural History Society surveyed beaches of Shriharikota Island in 2003 and 2006. The scientists surveyed 10 km of the beach and found 27 and 60 nests during each of the years near the monsoonal streams and canals. Most of these nests were depredated by humans. Housing one of the last expanses of coastal, tropical, dry, evergreen forests in India, these islands also seemed to be a promising refuge for olive ridley nesting due to the security provided for the space research centre. However, the effects of illumination on the hatchlings may be a threat. Basudev Tripathy had recorded 274 nests from Shriharikota in a 15 km stretch during his surveys in 2001 (Tripathy and Choudhury 2001).

Despite all the efforts revolving around sea turtle conservation in Andhra Pradesh, several hundreds of dead turtles continue to wash ashore. The Central Institute of Fisheries Technology (CIFT), Kochi developed a device called the Turtle Excluder Device (TED) and promoted it in Andhra Pradesh through State Institute of Fisheries Technology (Bhavani Shankar and Ananth Raju, 2003). However, the idea of the use of TEDs was not widely accepted.

Vishakhapatnam Society for the Prevention of Cruelty to Animals:

VSPCA is an associate member of the Royal Society of Prevention of Cruelty to Animals (RSPCA) and the World Society for Protection of Animals (WSPA) and is recognised by the Animal Welfare Board of India. It was set up “for the promotion of welfare of all animals which are an essential part of the environment and society” and “is dedicated to prevent cruelty and alleviate suffering of all animals”. Started in 1996, the VSPCA maintains a shelter for animals including cattle, dogs, cats and other animals. They campaign against cattle slaughter and have an animal birth control programme. They are also interested in wildlife issues such as illegal trade in monitor lizards and use of snakes by charmers. The VSPCA has also been involved in sea turtle related issues, such as the “illegal poaching of eggs and slaughter of adult female turtles”.

Green Mercy, an environmental conservation organisation, became involved in the conservation of sea turtles in the northern region of Andhra Pradesh. They worked closely with the Department of Environment of the Andhra University. In 1996, they started a ‘Save Sea Turtles’ campaign in Srikakulam district and extended it to Vishakhapatnam in 1999. Green Mercy’s agenda was to mobilise local communities and increase participation in conservation activities. They actively conduct turtle walks and generate awareness about marine conservation.

Trash on the beach

Talking to fisherment about abandoned nets

Key figures in turtle conservation and research in Andhra Pradesh

Visakhapatnam Society for the Prevention of Cruelty to Animals

Biswas, S. 1982. A report on the olive ridley, Lepidochelys olivacea (Eschscholts) (Testudines- Chelonidae) of the Bay of Bengal. Records of the Zool. Survey of India 79 275-302