A Different Group of Turtlers

‘Turtlers’ (sea turtle researchers, conservationists and enthusiasts) are a fairly cohesive group, bound by our dedication to these charismatic animals. In the last few years, turtlers have gathered en masse at the International Sea Turtle Symposia in Kobe and Charleston, and in smaller groups at the International Marine Conservation Congress and International Conference on Conservation Biology in Kuala Lumpur. The majority of turtlers at these meetings were academics, students, researchers, conservationists, volunteers, and managers sharing information about the biology and conservation of our favourite species. But October 2019 saw a different gathering of stakeholders, albeit one with the same focus on sea turtles- the 8th Meeting of the Signatory States to the Memorandum of Understanding on the Conservation and Management of Marine Turtles and their Habitats of the Indian Ocean and South-East Asia.

That’s a mouthful, so it’s commonly referred to as the IOSEA MoU. An intergovernmental agreement administered through the CMS (Convention on the Conservation of Migratory Species) by UNEP (the United Nations Environmental Program), the IOSEA MoU provides a framework for Governmental and non-governmental agencies to together work towards conservation of shared sea turtle populations and their habitats within the region. Thirty-five countries are currently signatories to the MoU, and their communication, activities and reporting are facilitated by a Secretariat of the CMS. The last meeting of the Signatory States was in 2014, so this 8th meeting was highly anticipated.

At the IOSEA meetings, each Signatory is represented by a designated Focal Point, often a senior government employee, who acts as the main point of communication between the Secretariat and their State. Focal points can be accompanied by a national Authority on sea turtles, often a government manager, university researcher or NGO representative who works directly with sea turtles. Also in attendance are members of the Advisory Committee, who provide scientific, technical and legal advice to the IOSEA Signatory States and the Secretariat, additional Invited Experts from the region, and interested Observers.

The 8th IOSEA Meeting was held in Da Nang, VietNam. As I settled into my assigned seat as an ‘Invited Expert’ on the first day of the meeting, Murali M. (Dakshin Foundation and Chair of the Northern Indian Ocean Marine Turtle Task Force) arrived and I had to stifle my laughter. Just a few days prior, I’d balanced behind him on a motorbike as we travelled from a conference venue to a nearby lab for a meeting. I couldn’t remember what we had been wearing, but it was almost certainly more of a ‘field casual’ jeans and shirt compared to our current ‘business formal’ attire of traditional Indian salwar kameez (me) and two-piece suit and tie (Murali). The difference in formality between the two events could not be more obvious; I was now more likely to spot a turtle-patterned tie than a tattoo or t-shirt on proud display. 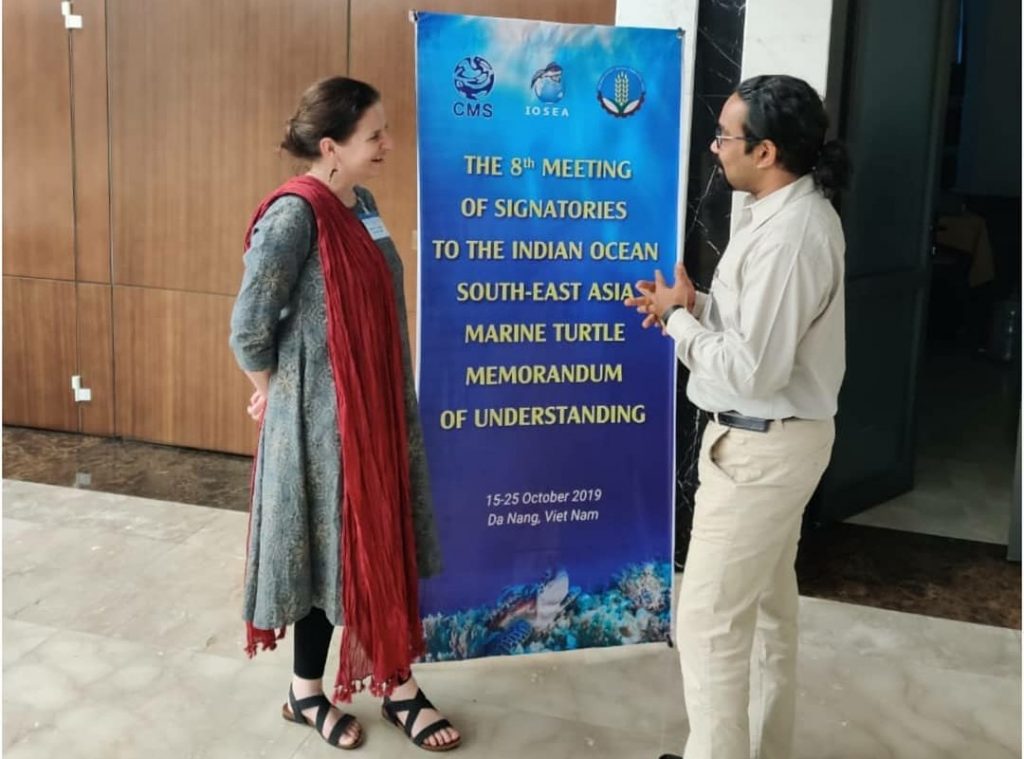 But if our background and dress were different, the focus of the people gathered was the same- turtles. We heard updates from Chairs of the Northern Indian Ocean and Western Indian Ocean Marine Turtle Task Forces. Focal Points reported on their locations in the ‘Network of Sites of Importance for Marine Turtles in the Indian Ocean’ and the proposal of an additional site to the Network was accepted. Technical presentations on sea turtles in VietNam, the threat of plastic pollution to post-hatchling turtles, use of drones in turtle research within the British Indian Ocean Territories, findings of satellite telemetry studies in the Arabian region, and the urgent need to account for turtle trade drew us back early to the meeting room from our lunch breaks. As an Invited Expert, I provided guidance for sea turtle hatcheries. Having recently completed a survey of hatchery practices in Bangladesh, India, Maldives, Pakistan and Sri Lanka, it was a valuable opportunity to directly communicate with people who have the potential to shape national practices. Attendees at IOSEA meetings come from diverse professional backgrounds, so my task was to describe- without scientific jargon and within a 15 minute time frame- the best practices and conditions for successful development of sea turtle embryos and production of hatchlings with high fitness. This included best practices for collecting and handling sea turtle eggs during transport to the hatchery, recommended nest depth and density during egg incubation, conditions in which shading might be important, and when and how to release turtle hatchlings. Hatcheries are commonly used to protect sea turtle eggs in South Asia and South-East Asia, so the suggested practices resulted in a lot of follow-up discussion during and after the session. Other emerging issues discussed during the meeting were those of light pollution and underwater noise.

The meeting agenda included a review of the Draft IOSEA MoU Work Programme for 2020-2024 which had been prepared by the Secretariat and Advisory Committee. We were divided into sub-regional groups for the exercise; I worked with meeting attendees from the Northern Indian Ocean (NIO; comprising Bangladesh, India, Maldives, Pakistan and Sri Lanka) to discuss the 100 point work programme and determine the priority of each objective for the NIO. Despite geopolitical, economic, and environmental differences among these countries, it was an efficient and thoughtful group who considered each item from a regional perspective to determine which should be prioritised for conservation of our migratory sea turtles which have no regard for national borders. We discussed the likelihood and scale of threats in different countries, the potential success of proposed initiatives, and how to assess the success of conservation actions. The value of our diverse backgrounds became very obvious at this time, as we were able to combine the perspectives and experiences of government representatives, researchers, NGO representatives, and academics. And even though two Signatory States from the region were not physically represented, those of us who had attended several past meetings and/or collaborated on in-country studies were familiar with their national contexts and could ensure all countries were equally considered. 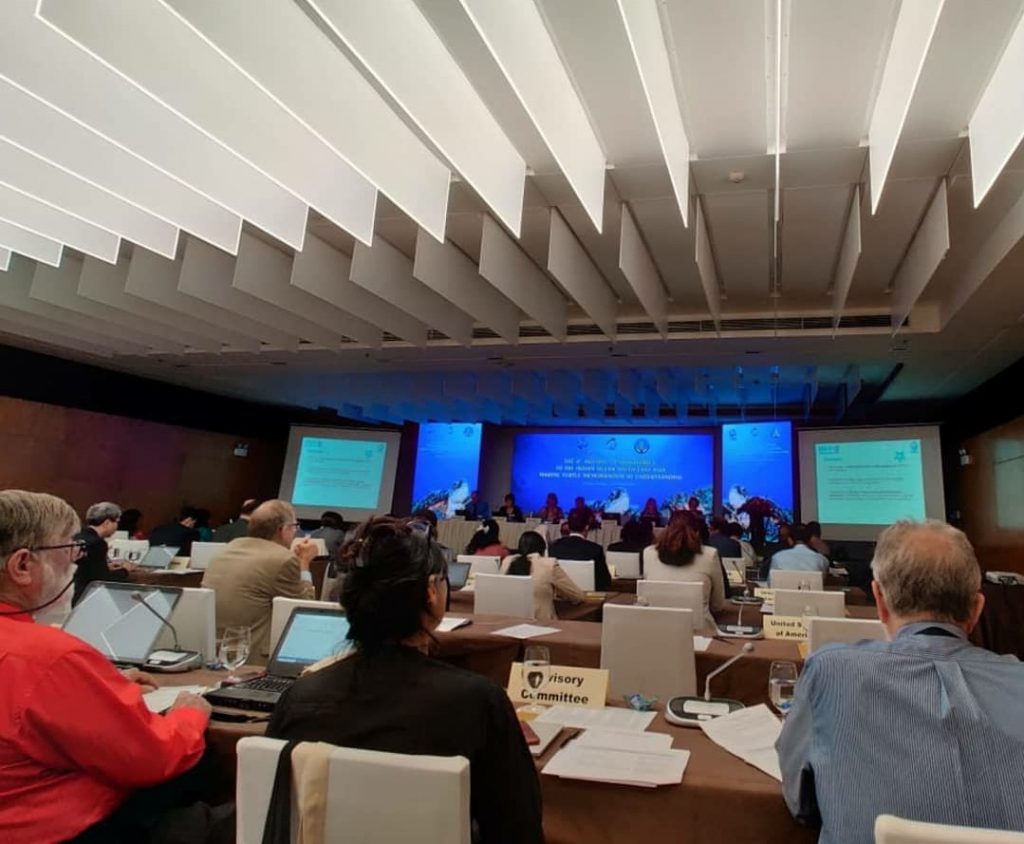 The marathon effort of reviewing the Draft Work Programme with the NIO group was followed by the Secretariat compiling the priority ratings from all sub-regions into a single document so we could decide on priorities for the IOSEA region. The final Programme is now available on the IOSEA website (https://www.cms.int/iosea-turtles/).

When the next meeting of the IOSEA MoU will be held is yet to be determined. But I hope to again have the opportunity to work with a different group of turtlers than I often see on the beach or at conferences; their position and background may be different to mine but their focus on the conservation of sea turtles and their habitats is the same. 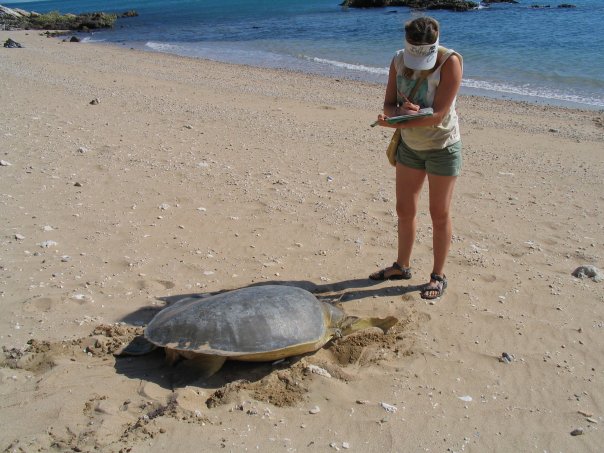 Dr. Andrea D. Phillott is a Professor in Environmental Studies at FLAME University in Pune, Maharashtra. Her research focuses on the biology and conservation of sea turtles in South Asia.